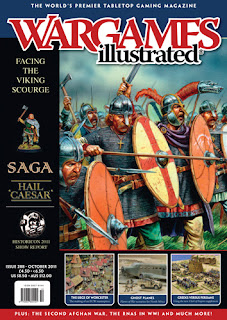 I received my copy of Wargames Illustrated (issue 228) a few days ago and now that I've had a chance to scan through it I thought I'd give some of the highlights a quick mention.

This month the theme is Vikings and there are a couple of interesting articles to wet our appetite. In particular the article Oh Lord, Deliver us from the Fury of the Northmen! Rick Priestly plays Darren Harding of Gripping Beast at a game of SAGA, their new Dark Age skirmish game. It looks pretty good.

Another article that caught my attention was Ghost Planes of the Sahara. The film Flight of the Phoenix was based in part on stories of real life crashed aircraft in this vast desert. Unfortunately most of the examples described in this article ended with the loss of the crews. In some cases the aircraft remained missing for decades only to be rediscovered by oil drilling companies exploring the region in the 60's. This article uses the film and these historical accounts to build a series of scenarios for games based on the Flames of War rules. Aside from being an interesting subject ably demonstrated the flexibility of a rules system when a little imagination is thrown in the mix.

There are also some more pictures of this years Salute show back in April. I wasn't able to attend for the first time in years and consequently I take a great interest in pictures of this event. These pictures are part of an article by South London Warlords president Phil Portway about the show and the plans for next year. But what's that I see lurking in the picture at the bottom of page 114? Only my Brother-in-laws face staring back at me! [Third from the right with short ginger hair, wearing a grey sweater]. I've been reading the WI for years and always check out show pictures to see if I've been snapped. Hell, I've been known to throw myself in front of cameras in the hope of making it into their hallowed pages, and here he is just strolling around and BAM! he gets his picture in MY magazine..... Oh the injustice!
Posted by BigLee at 14:06

Email ThisBlogThis!Share to TwitterShare to FacebookShare to Pinterest
Labels: Magazines