Following on from last weeks post about washes and inks here are the results of my testing of various alternatives to Army Painter Quickshade. I should however quantify my findings in that I am comparing them against a product I have never used. So the findings detailed below are really just a list of alternative ways to quickly shade or wash your miniatures. I'm sure there are dozens of other products available and many and varied ways to achieve the effect I have been seeking and if you have any suggestions please let me know in the comments below. I also think the overall effect of the products tested would vary from one scale to another. I've been painting miniatures for nearly 30 years but shifting down from predominantly 28mm to 15mm figures has meant I have head to re-learn many skills. Experiments like this (and the discussions that follow) are all part of that process. 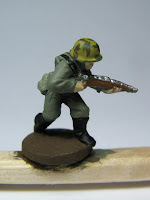 I tested four popular materials for quick-shading or washing miniatures. The first was a 50/50 mix of Wood stain mixed with distilled water. The second was Games Workshop Devlan Mud wash. The third was Winsor and Newton Peat Brown ink and the last was Vallejo Smokey Ink. I started this test by mounting four identical battlefront 15mm infantry figures on a piece of wood for easy of handling. Then each was given a basic paint scheme sticking to the principle of minimizing the number of steps from bare metal to finished figure. The prepped figures looked very rough and basic but hopefully the washes would bring the color schemes together and hide any poor painting!


Wood-stain - This was an old tin of oil based rosewood wood stain that I found in a store cupboard. I'd read that this could be used as a wash and wanted to give it a try, but not on a completed platoon of figures! The liquid is very thick and viscous, is very dark in tone but has a fine almost imperceptible 'grain' to the pigment. I decided to dilute this and after several tests settled on a 50/50 blend with distilled water. This required a shake before use but otherwise didn't seem to separate and cause problems with the finished application. Applied by brush it looks a lot like Quickshade and its quite alarming to see the miniature disappear under the first pass of the brush. However excess liquid can be easily removed with another brush or the corner of a tissue.

Cleaning the brushes is a chore, requiring a little bit of White Spirit or brush cleaner to remove all the fluid. Another thing I found was that the drying time is significantly longer than the other products with the model remaining sticky for a long time after application. By far the biggest disadvantage is the glossy shine this product put on the model (similar I understand to Quickshade). Several coats of Matt varnish were needed to bring the gloss finish down (not shown). Having said that, the shading is deep and bold with solid shadows and subtle shading of larger areas. Not bad for a product found in the back of a cupboard. Overall I give this a 2 out of 5. 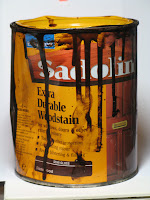 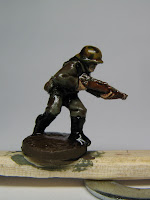 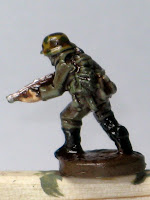 Games Workshop Devlan Mud Wash - I bought this product for £2.30 for a 12ml bottle. Its another thick and viscous liquid although not as thick as the Wood-stain. Again it looked very dark in the tub but this time is used it neat, as suggested by the store manager. Again liberally brushed on the initial effect looks like the model is being swamped however like the previous test excess liquid is easily removed with a brush or tissue. This product flows well and feels like its doing what its supposed to do, quickly settling in the recesses and creases of the figure. When it dried it didn't leave a high gloss finished but still required a Matt varnish to complete the model. Overall I give this product a 4 out of 5. 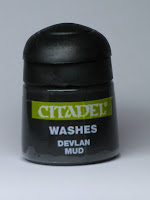 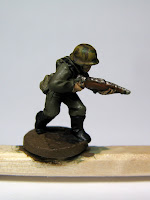 Winsor and Newton Peat Brown Ink - This cost me just 50 pence online.. and £4.35 in postage! This is a much less viscous liquid and was just what I expected for a product sold as a drawing ink. I decided not to dilute the ink after a quick test, as I wanted stronger shading. On a 28mm model or larger I'd imagine the bold shading would not work well but on a 15mm model it looked like it would be OK. Application was quick with very little excess being deposited on the miniature. It quickly settled into the recesses and even when dried the ink did not bleed into the raised areas and therefore did not darken the whole model excessively. It did leave a slight shine to the surface which required a Matt varnish to eliminate.

Overall I think this product gave the deepest and sharpest shading with the least discoloration to the base colors. The deep pigment is very fine grained which meant that even tiny details such as the rifle bolt were crisply outlined by the ink. Overall I give this a 3 out of 5. 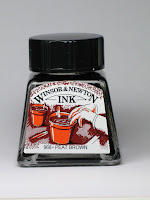 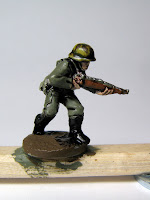 Vallejo Smokey Ink - I already had this product and it cost the princely sum of £1.60 for a 17ml bottle. I had high hopes for this product as on the whole I like the Vallejo range (I use the model color paints exclusively). The fluid was actually thicker than the Winsor ink and significantly deeper in tone. After a brief test I decided this would need to be diluted 50/50 with Distilled Water just as I had with the wood-stain. Application once again seemed to swamp the figure but unlike the other products it remained on all the surfaces of the figure not just the recesses. The result was that although it gave deep shaded areas the overall model had a brown/orange tint to it when dry. However this did result in better skin tones than the other tests. Overall I give it a rather disappointing 3 out of 5. 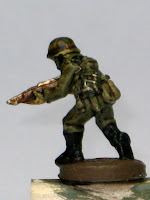 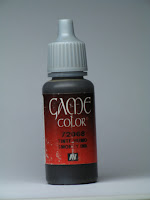 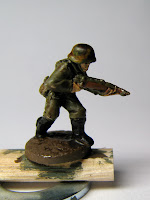 This last picture shows all four test models side by side. Overall I liked the crispness of the Winsor and Newton ink but did think the finished model looked a bit too bright and 'cartoony'. The GW Wash probably game the most naturalistic look but didn't give the deep shadows that ink can achieve. Having said that I think I will use the Devlan Mud on my next infantry platoon (a US Rifle Platoon) which is already base-coated and just waiting for a wash and varnish.

Having completed this less than scientific test I'd like to throw this subject out to you the readers and ask the all important question: What do you think? Which of these do you prefer and why? I'd be especially interested in any feedback you can give comparing these results verses Quickshade or indeed any other product.
Posted by BigLee at 15:14