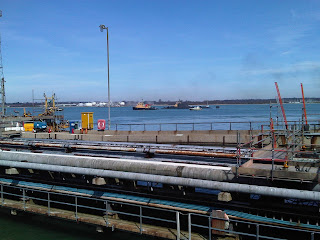 Yesterday I went to Fawley near Southampton to visit one of my companies offices. The office itself is based inside an Oil Refinery, right on the end of a jetty sticking out into the Solent. Fortunately the weather was nice and sunny but I can imagine it would be a grim place to work in the middle of Winter. Needless to say I was very busy (you know, actually doing some work for a change) so didn't have time for anything hobby related. However there was one little interlude that stopped everyone in their tracks - as one of Britain's nuclear Submarines slipped by the end of the jetty, just a few hundred yards away.
Britain has four Vanguard Class submarines - Vanguard, Victorious, Vigilant, and Vengeance -  built at Barrow-in-Furness by Vickers Shipbuilding. Each vessel is theoretically armed with up to 16 Trident II Submarine-launched ballistic missiles (SLBMs). Each missile is capable of carrying 12 warheads although the START I treaty reduced this to 8 and the SORT Treaty reduced it again to 4 or 5. Even so that means each sub potentially contains 48+ warheads. Warheads come in different sizes (like shoes) with the smallest being a mere 100 kilotons! The Bomb dropped on Hiroshima - innocuously named Little Boy - had a yield of between 13-18 kilotons. 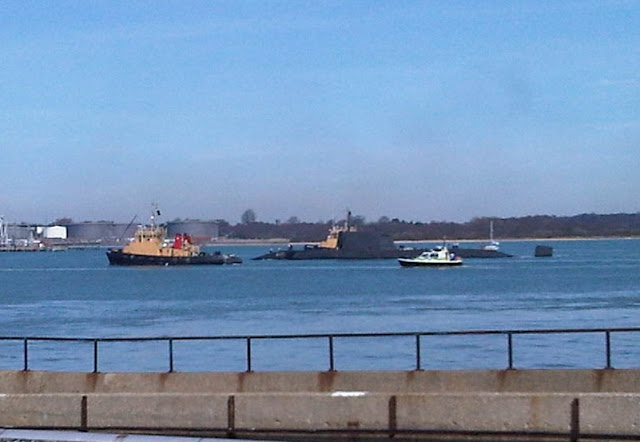 So with a quick bit of rough and ready mental maths that means the sub that slipped silently past us in the spring sunshine potentially contained the nuclear capability to replicate Hiroshima 266 times!!! And that's assuming it had the smaller 100kt warheads, the larger ones have a yeild of 475 kilotons each... Gulp!

That's one conflict I definately don't want to wargame.
Posted by BigLee at 11:35