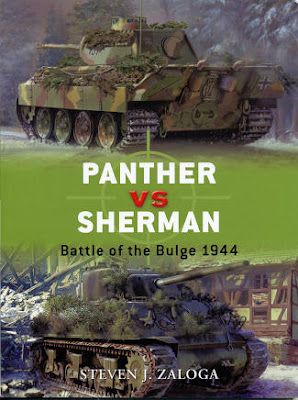 Like most Wargamers I find it hard to resist buying the occasional Osprey guide. The Duel series in particular are interesting because they compaire vehicles from a spcific combat or theatre of operations. I bought Panther vs Sherman:  Battle of the Bulge 1944 at the Cavalier show a few weeks ago and now that I have read it I consider it to have been worth every penny.
Like most Osprey's the book is well illustrated throughout with colour drawings and an interesting selection of Photographs. On of the things I liked about this book was the comparison of internal crew space between the turret of the Panther vs Sherman.


I find that when I read a history book that often one or two facts can leap out as so significant they stick in the mind long ofter you have moved on to another volume. This guide had many such facts in its pages as well as some unique and enlightening photographs. But for me the fact that stood out most came towards the end of the volume when discussing reliability as a key feature of the success or failure of these two iconic tanks.

By the end of the Battle of the Bulge as much as 55% of 'Operational' Panther's were sidelined due to mechnaical problems, while only 9% of Sherman's suffered similar reliability issues. Combined with the number of tanks available to each side - and the rate at which losses could be replaced - and the reader is left with a very clear picture of why the allies ultimately won the campaign to liberate Europe.