I'm finishing of the week with another dose of nostalgia. When I came across this photo a few days ago I couldn't help chuckling and thinking "I must put this on my blog". The year is about 1984 and this is ME (before I became BigLee obviously) preparing for a D&D game. I'm not sure what shocks me more, the wallpaper or the fact that I have a full head of hair! 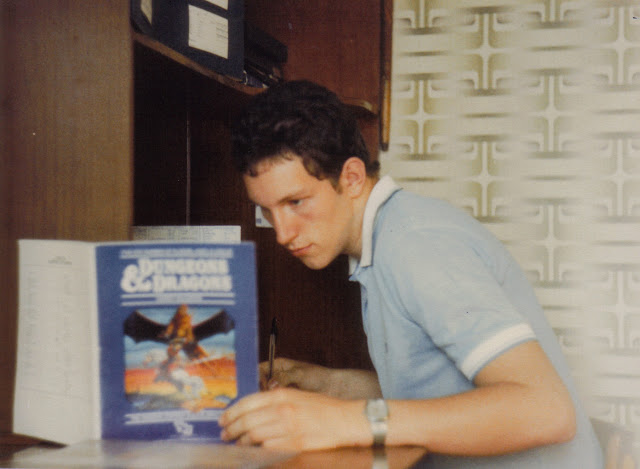 The picture was actually a posed shot, taken by myself using a timer. I was preparing for a game and decided to stop and get a picture of myself. But after I saw the photo I thought it was a silly idea because it felt 'staged'. Now I look at it and think "OK this was 'set up' but its also the only picture I have of my early passion for games" and in that respect I think its actually an important photo. I'm glad I took the picture because unlike today, when everyone at a game is shooting pictures, back then we rarely thought to record our games for posterity.
Posted by BigLee at 09:01