My recent visit to Bletchley got me thinking about how far children's toys - and by extension models for adults - have come in only a handful of decades. The museum held several examples of model casting kits but more intriguingly genuinely homemade toys, crafted by children and adults alike. Today the idea of presenting a child with a hand made toy is almost ridiculous. I suspect, from the child's point of view, the idea would be met by a mixture of incredulity and abject disappointment. But once upon a time a wooden tank or doll would have been a wondrous present much loved and cared for.
When I was a kid I had a big collection of Airfix plastic soldiers (1/32nd scale) and would line them up for battles throwing marbles at either side. Although I didn't know this at the time this was a similar approach to the Little Wars rules devised by H.G.Wells. I took this a stage further, using elastic bands as my ammunition of choice and take turns firing at each group of soldiers until one side won by attrition alone. Later still my father made plywood 'guns' to fire the rubber bands and my carpet warfare became a test of accuracy as well as tactics. And being a hand made toy, crafted from durable materials to a simple design, it lasted for years and years. 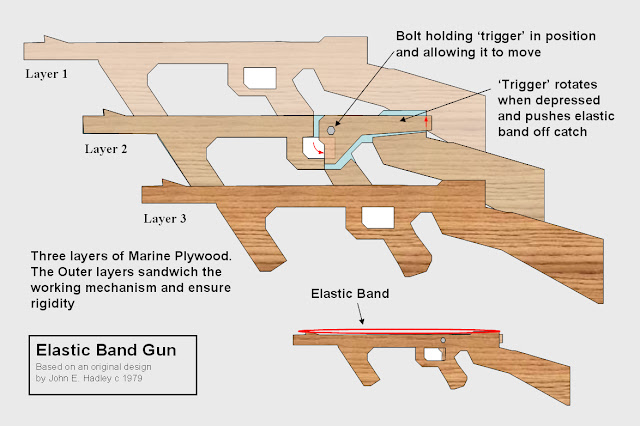 The guns were shaped like a Tommy Gun and had a trigger which released the elastic band and sent it towards the 'enemy' troops. Unfortunately, like so many childhood toys, these have long since been lost and I haven't even got a photo of me using this homemade toy. However, I've recreated the design above for anyone that might like to make one for themselves. I have not put sizes on my diagram as you'll have to make it to fit the elastic bands you have available and the size of the 'user'.
Scanning through the Internet I've seen dozens of variations on this idea. But unless anyone can tell me differently, I had the granddaddy of them all, back in the summer of 1979.
Posted by BigLee at 09:01