When photographing miniatures its sometimes hard to get good pictures without a studio type setup. This is especially true when trying to get photo's of miniatures at wargame shows where you can't carry huge amounts of equipment. Tripods and studio lights with softboxes are not practical at busy conventions so most photographers resort to using the built in or pop-up flash on their camera. The problem is that small light sources mounted close to the lens produce a very unnatural form of light and this often results in hard shadows and washed out pictures. 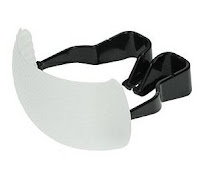 If your camera has the option of high ISO settings then it is possible to get reasonable pictures without flash, even in low light conditions such as halls and display rooms. But these pictures lack the crispness and colour saturation possible with proper studio lighting. One solution is to use a diffuser on your flashgun. These often take the form of reflectors or hoods that clip over the top of the flashgun to soften the harshness of the flash.

I recently bought a diffuser for my Canon EOS 500d but I wanted one that would be usable with the built-in flash. I found what I was looking for on Amazon but similar products are available from many online retailers. This particular product clips into the flash hotshoe and holds a concave plastic diffuser in front of the pop-up flash. It can be left in the hot shoe and does not impede the flash as it deploys.

The pictures below show the difference the diffuser makes to the finished image under the same lighting conditions and set-up. The first image is taken with the diffuser attached and the second is without.


The next two pictures were taken with the same f-stop and speed settings, without a diffuser, but using the flash compensation feature. This reduces the brightness of the flash reducing the 'washed put' look, in this case by -1 and then -2 stops. As you can see this does go some way towards improving the finished image but getting the right compensation level (the camera can adjust by 1/3 of a stop) is a bit hit and miss. ﻿﻿
Overall, using the diffuser produces better colour saturation and softer shadows. Flash compensation goes some way to correcting overexposure but this results in flat colours and rather 'muddy' skin tones.

On a final note its worth highlighting that Diffusers of any kind reduce the amount of light that your flash unit produces. However, so long as you’re using Through-the-lens metering - and most digital cameras do - then the camera will compensate automatically. One thing you have to remember however is that you’ll have decreased flash range (up to half) but for close up photography this is actually a benefit as you'll be able to use a flash at much closer distances than normal.
Posted by BigLee at 09:01