From time to time I intend to post articles about old projects of mine. Hopefully most of the these will be projects that had a fruitful and successful end result. However I promise (dear reader) that I won't shy away from showing you projects that went horribly wrong. The woeful tale of the Gelatinous Cube is one such project.

A few years ago I was running a D&D campaign and desperately wanted to feature one of my all time favorite monsters, the aforementioned Cube. I hunted around for a suitable model but quickly came to realise that none were made commercially (this has since changed with the introduction of the Gelatinous Cube in the D&D Miniatures Desert of Desolation set). I did however find a couple of home made cubes and instructions on how to make them (Here & Here). I was inspired and set out to make one of my own. 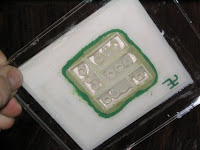 I started by making a block from Lego bricks that was slightly smaller than the cube I wanted to make. I then covered the outside with clay and fixed the whole thing to an old CD case. As I found out later the clay needed to be very smooth indeed, as any imperfection in its surface was picked up in the latex mold.

The next step was the application of the latex to make the mold itself. I used Gedeo Latex which came in a 1 ltr tub. This material needs to be applied in a series of thin layers with each subsequent layer being added when the previous one has dried. The instructions 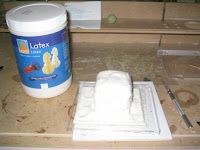 suggest as little as 4 layers are needed to make a mold but as I wanted to be able to reuse this several times so I eventually used 8 layers. Its worth mentioning at this stage that this stuff is quite smelly - it resembles Copydex glue - and the layering process should be completed in a well ventilated area. If you can find a warm place to store it this will also speed up the curing time. Once all the layers were completed it was a simple process to peal the mold from the underlying block.
I then mounted the mold inside a block of Lego bricks (I've always liked Lego) to support the sides so that when filled with resin the whole thing would retain its... cubishness. For resin I again turned to Gedeo and their Crystal Resin. This two part liquid imitates glass paste forming a solid and transparent material within a few minutes of mixing. Prior to mixing I painted a plastic skeleton figure to drop into the liquid to represent an unlucky adventurer - the Cubes last meal. 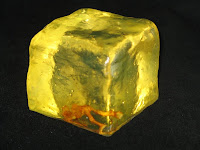 This is where things started to go wrong. The Resin needs to be mixed quickly and thoroughly but without making air bubbles. This is no easy task if you haven't done this before. Also the mixed product sets relatively quickly - you have between 5 and ten minutes at most. I suspect that I didn't mix the product properly but whatever I did wrong I ended up with a distinctly yellow finish. Plus the plastic model didn't sink into the resin, it floated! I was also disappointed with the rather Matt finish to the surface of resin (in part because I didn't line the mold with Demoulding Vaseline).

I made two cubes but both fell far short of my desired objective. I had other models that needed completion so I never made any more and left this project feeling slightly dejected. Having said that both models saw active service in my D&D campaign, chasing hapless adventurers through a labyrinth of tunnels. Sadly neither cube fed on adventurer.
Posted by BigLee at 11:38