As previously stated I am making quite a bit of tabletop terrain this Challenge, specifically ruined buildings for Frostgrave. However, I also have quite a bit of resin terrain that I have been collecting over the last few months and two of these are now complete. The buildings come as individual wall sections and I could have painted them as such to allow more flexibility when placing on the table. However when I was cleaning them up if quickly realised that any jogging of the table and they all fall over, so I decided to mount them as whole buildings on foamboard bases. This has the added benefit that I can just pull the whole building from storage and plop it down on the table to throw together a quick cityscape. 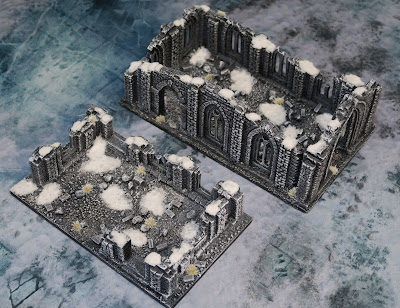 The Church building is a simple rectangle, so more of a chapel than a church, but it has some nice features and is quite detailed. The other building in a similar style of brickwork but the walls have clearly suffered the ravages of time (and ice) and are therefore much lower. 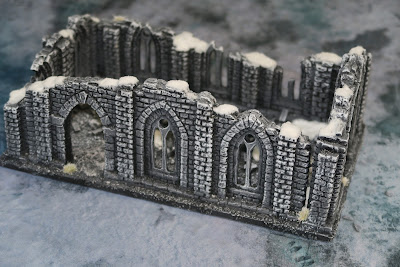 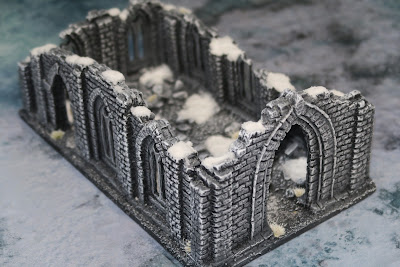 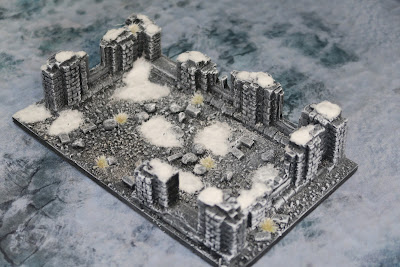 These resin models are made by Debris of War and were very reasonably priced. They didn't need much cleaning up and were pre-primed when I bought them. However I have adopted a paint scheme that starts with a black primer so I re-primmed them before starting on them, and hopefully, they will match the rest of my buildings in colour scheme if not in architectural style. As with my other buildings, I filled the interior with tallus in a range of sizes from large to small, along with a few suitable scaled bricks to represent fresh sections of stonework that have fallen to the ground. 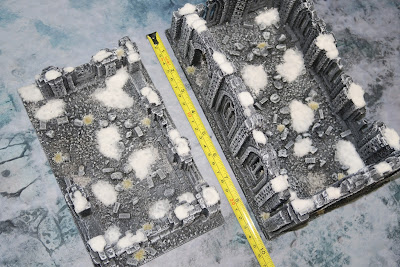 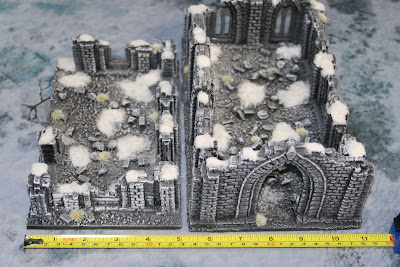 The church is slightly over volume of one terrain square (4"x6"x9.5") while the other building equates to a third of a terrain square (2"x5"x8"). I'll let the umpire adjudicate this but I'm guessing this will earn me about 25 points and get me one step closer to completing my frozen cityscape. The next set of buildings will be more of my scratch-built/bluefoam models, some more complex than others.
Posted by BigLee at 08:00