I have been trying to do a bit of terrain work every week but I got a bit behind and so today I'm trying to make up for it. This is a selection of mostly homemade buildings made from blue foam with one resin model embellished with additional rubble. 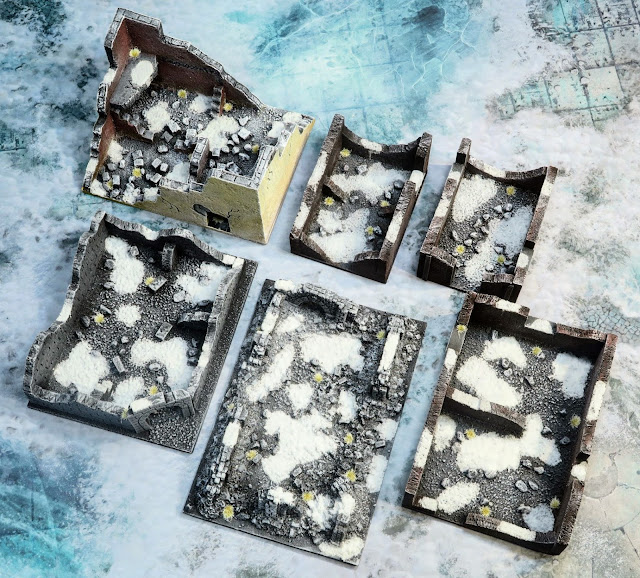 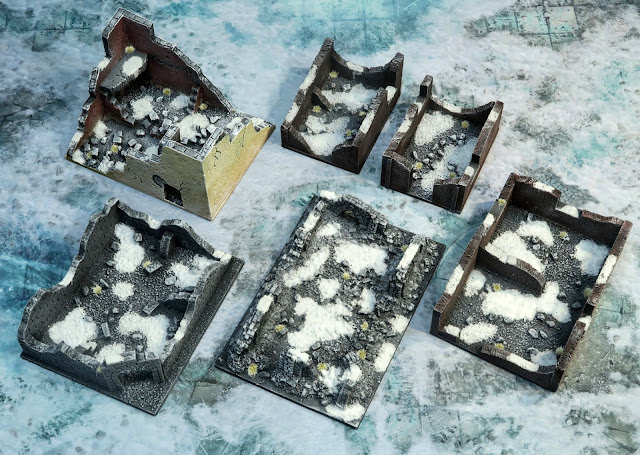 This resin building is made from several pieces that  I bought from Debris-of-War. As with my earlier resin models I decided to base them to form a single building that can be quickly plonked on the table and rearranged as needed from game to game. This model isn't of perfectly aligned walls, this time the building has clearly slumped and partially sunk in the ground with only the tops of window arches visible and walls at odd angles. This process is often seen at earthquake sites where loose ground 'liquifies' when shaken violently, causing buildings to literally sink as if built on mud. The resin sections make most of a circuit for the walls so I mixed up some rubble goo to fill in the blanks to suggest sections that have completely disintegrated. 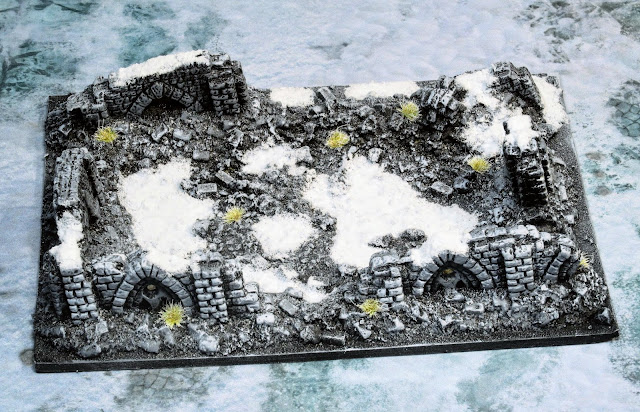 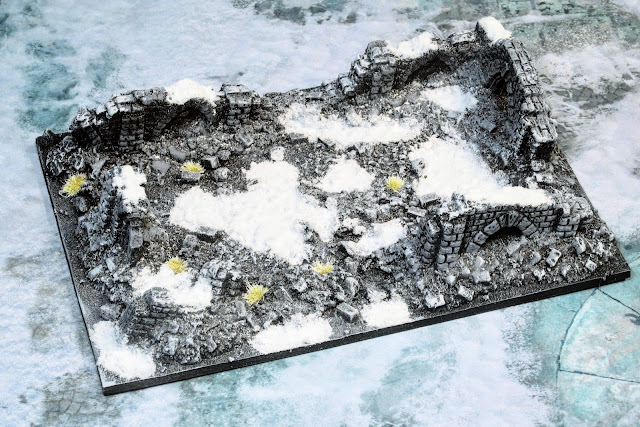 A Trio of Brick Buildings
These three buildings a smaller than most of the others I have built so far and were the first to make use of a new tool that I bought...a textured rolling pin. I got mine from a company called Greenstuffworld in Spain and on the whole I'm pretty pleased with it. The texture could be a little more pronounced but with sufficient pressure, it makes a good impression on foam and makes short work of creating brickwork. I imagine that these small brick buildings are lower status structures, (maybe artisan buildings) as opposed to the stone-built more monumental buildings I have done so far. They also add a bit of colour to what has until now been a largely stone grey and frosty white landscape. 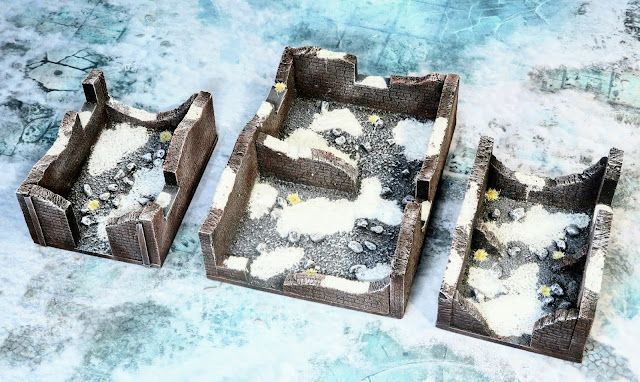 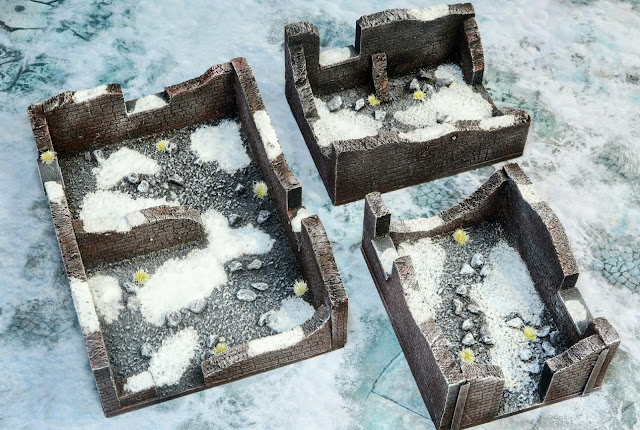 Corner Arched Building
This was an excuse to have a go at making an archway. This time I have opted to model a stone building made in larger stone blocks rather than brick. I have liked to imagine a use for all the buildings I have done so far but, to be honest, I don't know what this could be. Not that having a backstory for a terrain item is necessary of course! 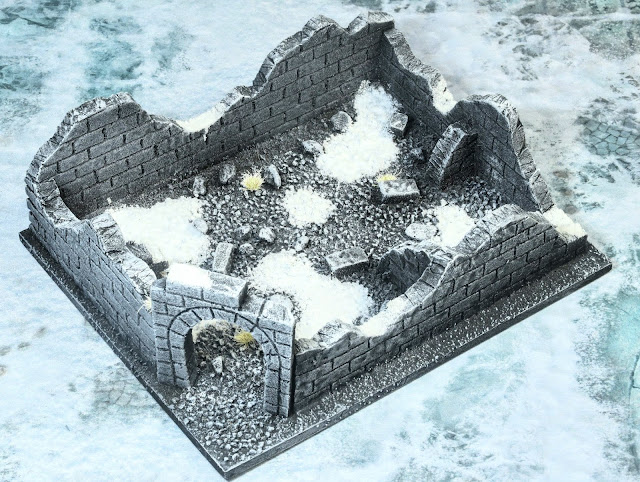 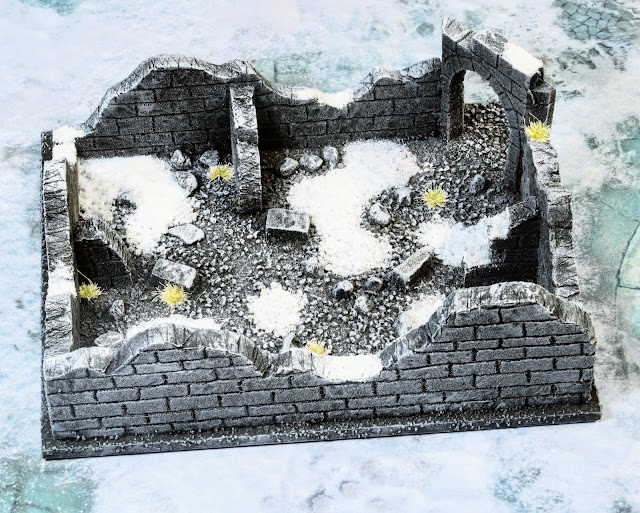 The Rectory House
This is a larger building, formed essentially out of two corner sections with the hint of internal walls. For speed I chose not to model brings or stones for the whole building, merely hinting at it in places and treating the surface as if it were plastered. This makes me think this is more of a residence than a civic building. 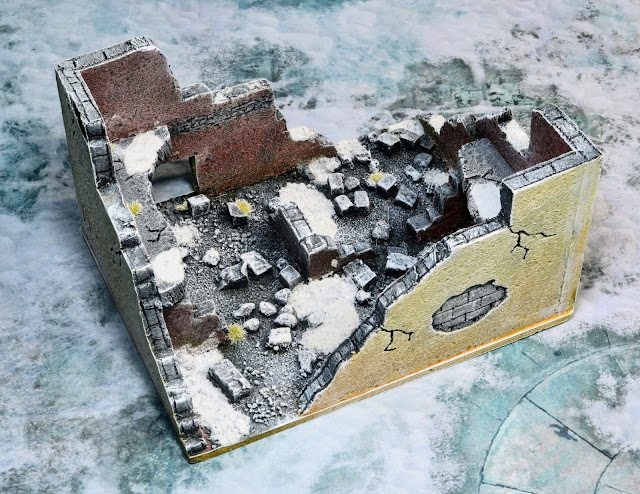 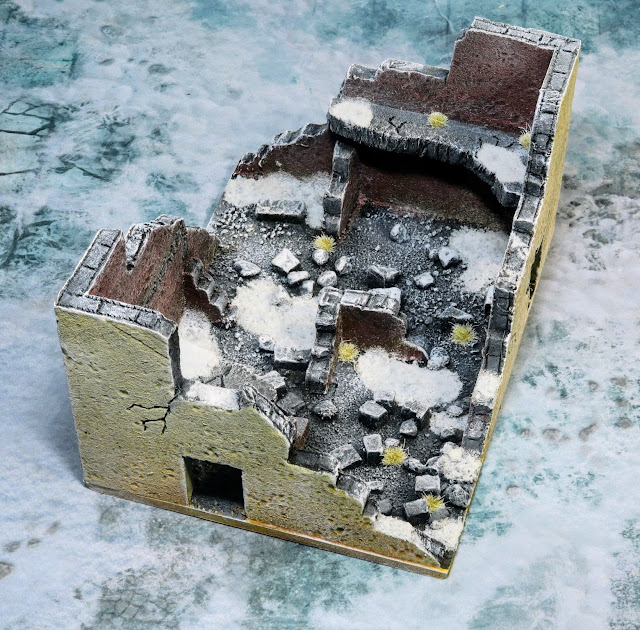 Incidentally, I have decided the overall look of my buildings is a little too dark and needed some extra attention. I like the black undercoat and high contrast shading I have used to give the terrain a frosty look, but I think all my buildings need some extra snow. I've decided that when I finish all of them I'm going to go back and add a dusting of snow to everything. I'll make up some dilute PVA in a spray bottle, apply it to all the models and 'dust' from a few feet above with the Woodland Scenics snow I have been using. If I do this at the end of the process I can ensure that I achieve a consistent effect across all my buildings, helping to bring the collection together as a coherent set of terrain. 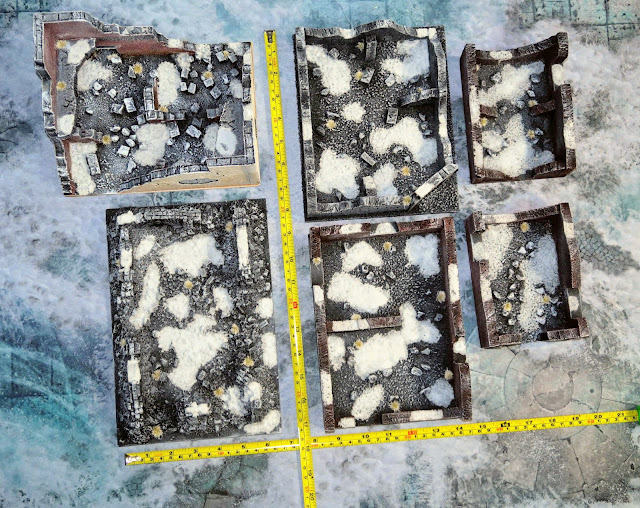 Sizes and Scoring - None of these neatly fits into a terrain cube as defined in the Challenge rules, so I have added up the overall dimensions of all the buildings and divided by 216 cubic inches, equalling a little over four terrain cube, so 80 points. ­

I think this is enough of the 'simple' buildings for the time being. I have quite a bit of terrain now, enough certainly to cover my small table for a game. I have a couple of more delicate resin models to put together and a few stand-alone items and scatter terrain to work on next. I'm also planning on making a couple of more complex buildings from foam but these will take several weeks just to construct let alone prime and paint, so expect to see these towards the end of the challenge. A very wise man (MilesR in fact) suggested the way to notch up the points was via terrain, and he wasn't wrong!
Posted by BigLee at 08:00