After several terrain entries, I decided it was time for me to stop procrastinating and make some progress with my 6mm Classical Indian army. I have already submitted some archers and javelinmen which make up the bulk of my infantry and now it was time to get started on some of the more colourful units in the army. First off the production line are the Cavalry. From what I have read Indian Cavalry were fairly low-status troops and certainly didn't represent the wealthy elite as in many European armies of the time. However, that doesn't mean they weren't colourful and I have really enjoyed painting these (once I got started!). Once again I have referred back to the work of Duncan Head but I have also been hunting down lots of visual reference material from the inter-web and my much more modest book collection. 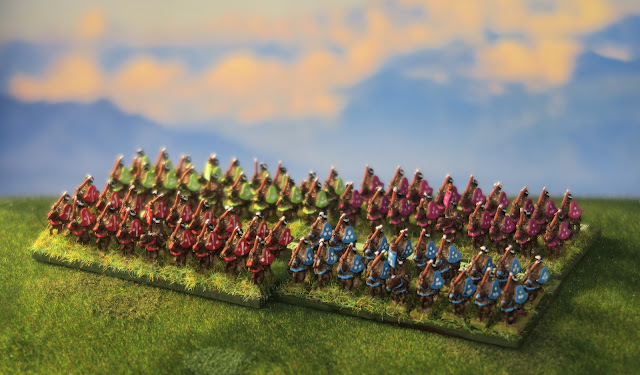 The Indian Cavalry at the Battle of the Hydaspes were completely outmatched by the Macedonians facing them. For a start, they wore little or no armour protection apart from their shields. The Cavalry were also outnumbered, especially when Alexanders feint attack on the Indian flank drew off some of the Chariots that were positioned with the Cavalry. The soft ground of the battlefield, made worse by heavy rains, would have impeded both armies but the effectiveness of the Chariots would have been severely impaired by the mud and made the cavalry clash all the more significant to the eventual outcome of the battle. 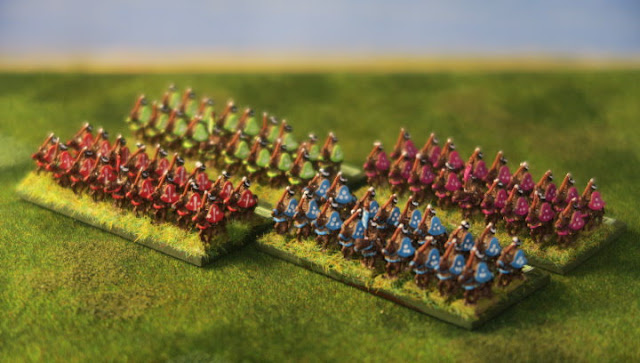 As with all my 6mm projects I start with a brown primer. I find that this works well because it fills the gaps between equipment and clothing while remaining light enough that the details of the figure can be seen when painting. Black undercoats at this scale just seem to suck up all the ambient light and it feels like your trying to paint detail on a shadow! I then work my way through all the elements of the figure and block paint as neatly as possible. I'll usually start with the face, arms and legs, them do the armour or cloths and then move on to weapons and lastly shields. The neater you do this stage the better the final unit will look. Once I have block painted the various elements of the figures I use a dark brown ink wash to add the required shading (I use a Winsor and Newton calligraphy ink called Peat Brown). Really that's all there is to it, 6mm really is that easy.

There are four units of Cavalry here, each with 18 figures per base (72 in total). The only question that remains is what to work on next? I'm tempted by the Elephants but I think I may leave these till last. If I'm honest, I'm painting this army purely because of the vast number of Elephants, so I think I'll use these as my reward for working through everything else. So that means my next project will be the Chariots. I have already been through the nightmare that was assembly (VERY fiddly when they are 6mm!!), so I can just focus on the fun of painting them.
Posted by BigLee at 08:00