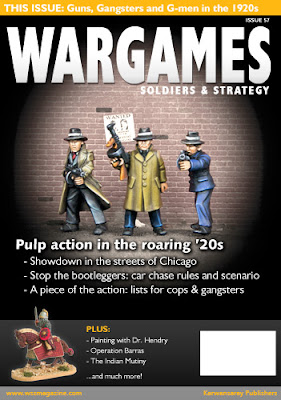 Issue 57 of the Wargaming Magazine Wargames, Soldiers and Strategy is on newsagent shelves and I snapped up a copy today. This magazine has had a bit of a rocky history when the English language edition ceased publication back in May 2010. However it returned with a new publisher (Karwansaray BV) and a new editor (in the form of Guy Bowers) in May of this year. I wasn't familiar with the magazine in its old guise but I have become a regular reader since its relaunch.

This months issue is themed around Pulp gaming in the 1920's. Although I'm not into playing the period straight (I like my gangsters mixed with secret cults and eldritch monsters) I have enjoyed this issue immensely. Its given me lots of ideas for my next Hollow Earth Expedition adventure which I am preparing at present. HEX is based in or around 1936, so a little after the period covered by this theme, but many of the miniatures and ideas covered could be utilised with minimal conversion.

As always with their themes there are plenty of ideas for models and scenery that I'm sure anyone into the period will find useful. The review of available miniatures was particularly interesting as it highlights manufacturers that carry suitable ranges.

Another good article is by Dr Phil Hendry who it seems has become an advocate of Dip for painting large units of miniatures. In fact he's the guy responsible for painting much of the Early Imperial Romans released by Warlord Games seen on their website. As a recent convert to the wonders of 'dip' I felt a certain kinship with Dr Phil's initially lukewarm feelings towards this technique. But like the good doctor I found that the finished product looks pretty good and its a great way to get lots of miniatures on the games table in a short time.

There is also a regular column by industry veteran Rick Priestly. Part two Of Dice and men - This gaming Life looks at the humble d6 and follows on from an equally interesting article last month about the d100. Both articles looks at the uses and restrictions implied by the choice of dice to the games designer and provide an interesting look inside the head of one of the most influential rules writers in our hobby.

The standard of presentation and range of content in this issue is high and its clean uncluttered design makes this easy to read. The reviews of new miniature releases at the beginning of the magazine are also very useful, not only for finding out about new releases but also for seeing new trends that are emerging (the shift from metal to resin for instance). All in all a very good read.
Posted by BigLee at 09:43