A few weeks ago I finally reached the point where my painted Flames of War figures exceeded the storage space available. I did actually have a couple of alternative storage bags (a GW Case and a Charon Skirmishpack) but the foam inserts were designed for 28mm single figures not for Tanks or Artillery bases. So I sold the two bags I had at SELWG on the Bring and Buy with the intention to buy a suitable alternative for my growing Flames of War forces. What I bought was the Flames of War Army Kit Bag (Prod BAG01). 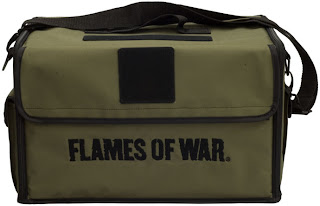 The bag arrived yesterday and by the end of the evening my models had been transferred to their new home. Now that I have had a chance to look the bag over in detail I thought I'd write down my initial thoughts on this product. I know I'm a bit late posting a review of a product that came out two years ago but I was so pleased with it I had to share my enthusiasm.
The bag material looks and feels tough. Some bags I have seen on sales seem rather flimsy but the outer material of this bag is much sturdier and looks like it will wear very well. All the seams are triple stitched and reinforced and the buckles and strap clips are made of metal not plastic.
The walls of the bag are reinforced, quite rigid and when zipped up the whole bag seems very robust. Other cloth bags I have used over the years have had far too much flexibility in them resulting in figure trays flexing and models dropping out of their foam slots. Another feature which will help prevent this problem is the fact that the trays are stored horizontally even when carrying the bag.
Inside the bag there are six trays each with a different configuration allowing for a selection of different sized bases and vehicles. The foam trays themselves are probably the best I have ever used. They have a high density foam base with the softer more flexible foam inserts glued on top. Other manufacturers I have encountered typically use the same low density foam throughout each layer (whether the inserts are cut from a single sheet or glued onto a base). This means they sag and bend with even a small amount of weight in them. That's fine while they are stacked in a bag or box but murder when you have to lift out trays to get to the models. The trays in the FOW bag are much more rigid and even when filled with tanks the trays hold their shape and are much easier to lift out and move around. This for me is a major benefit over any other bag I have used. 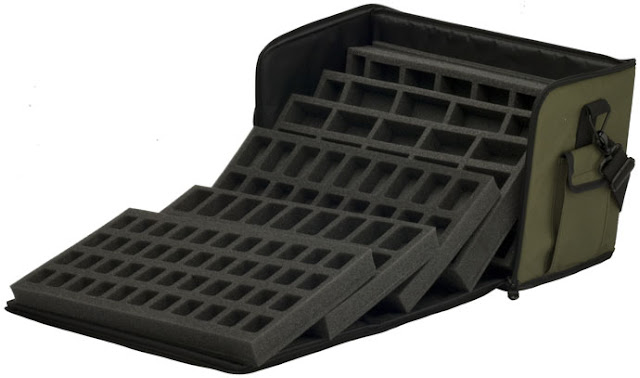 My current forces slipped in nicely and there is still plenty of room for the units I plan on buying in the near future. It is possible to get custom trays made by Battlefoam the manufacturers of this bag. Their custom tray creator allows you to select and position any combination of inserts into a standard tray for about £13.50 each.

Its rare to buy a product and be 100% satisfied with it these days but the Flames of War Kit Bag does hit the spot for me.
Posted by BigLee at 13:42