Farewell to the Crystal Singer

I was saddened to read on the Blog Grognardia of the death of writer Anne McCaffrey. Her passing at the age of 85 was reported in the New York Times and other respected newspapers.

Anne McCaffrey started writing in the 1950's but it was her Dragonrider of Pern series of books (of which she wrote over 20) that she will probably be best known to gamers. The series is set on the feudal world of Pern whose greatest threat is a deadly spore that rains down from space regularly to kill humans and lay waste to land. The only solution to the Threadfalls are the Dragon's whose fiery breath destroys the spore. Over centuries these creatures have been bread and paired with the Dragonriders who become the Paladins of this detailed and entrancing world mythology. As a Teenager I read several of her earlier Pern books which were a mix of sci-fi and fantasy that was refreshing when juxtaposed against my other reading fare of the time in the form of Howard and Lovecraft. 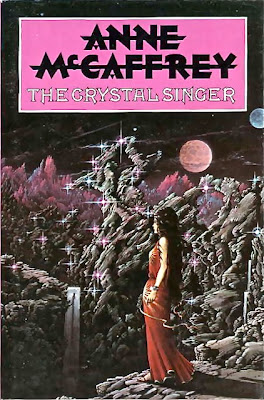 One book stood out though and it wasn't one set in the Perm Mythology. The Crystal Singer tells the story of Killashandra Ree and her struggle to become a crystal singer on the fictional planet Ballybran. Having trained her whole life to become a vocal soloist her hopes are dashed when a slight imperfection in her voice is found. With her future plans in tatters she learns about the Crystal Singers who use vocally tuned lasers to mine the Crystals essential for interstellar travel and communication. Singers are changed by their exposure to the crystals, and those that survive the change develop a symbiotic relationship that gives them new powers and extended life. Killashandra is determined to become the best Crystal Singer but first she has adapt to her changed state and master the many and varied dangers of her new profession.

I've always enjoyed reading science fiction and this book like the best sci-fi challenged my preconceptions about the future as well as creating a detailed and engaging setting. I remember it best however as a game that I played at a roleplaying convention. The Con was held in Brentwood and I and my friends travelled there by train to take part. This would have been about 1983 or thereabouts. Most of the RPG's being played inside were commercially available games such as D&D but there were also some home-grown games being tested by local game enthusiasts. We joined just such a game set in the world of the Crystal Singers and played a group of new recruits setting out on our first mining missions. The games action revolved around the hazards of the environment and the betrayals and treacheries of our fellow singers. For a group of gamers who had only played D&D it was a refreshing and interesting introduction to a wider world of RPG's and it certainly broadened our horizons.
Posted by BigLee at 10:45