I received my copy of Wargames Illustrated last week with it typically landing upon my doormat within an hour of my leaving on an overnight business trip. Having said that I find some time to just sit, relax and read over the weekend (and do a little bit of painting too) so I've had a good look through this issue.

The big Flames of War theme this month is the Eastern Front with a look at Tiger ace Otto Carius. The article Tiger in the Mud is named after the book by the same name recounting his experiences of tank warfare against the Russians. I've still not read this book, but hope to get a copy for Christmas (hint hint Mrs BigLee). There is also an interesting battle report for a recreation of Carius' own 'Wittman Moment' when he took two Tigers into Malinava (his own and that commanded by Lt. Albert Kerschers) destroying 17 of the new JS-1 Stalin and 5 T-34's. 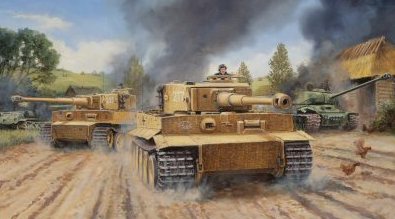 There is an excellent eight page article about the Comanche Indians of the Southern Plains of the US. This looks not only at the history development and inevitable decline but at their battle tactics and how they can be represented on the tabletop. History - and Hollywood - has painted the North American Indians as little more than unsophisticated savages barely out of the stone age. The truth as always is more complex and infinitely more interesting. Many years ago I read the excellent history Bury my Heart at Wounded Knee by Dee Brown. First published in 1970 this history of the West from the Indians perspective has never gone out of print and is a must read if your interested in the period of the Indian Wars.

Another great article was the review of the game Clad in Iron that featured at this years Salute. This is a 'what if' game but has been written from an expert in the period, Dr Howard J.Fuller. Dr Fuller teaches Military studies at Manchester University but is also an avid wargamer and this game derived from a game he wrote, but never published, before he completed his Ph.D.. In fact the story of the development of this game is almost as interesting as the concept of the game itself. This is set around a fictional but plausible conflict in 1864 and pits the growing and powerful navy of the US against the maritime power of Great Britain.

There's plenty more in this issue to interest other readers including an article about the Battle of Marengo in 1800. Illustrated with an excellent series of pictures this Battle Report uses the General de Brigade rules to look at one of Napoleon’s seminal victories. There's also great photo report on the Colours 2011 show held in Newbury in September. Yet again WI has left me drooling and wishing I'd gone to this event...maybe next year!
Posted by BigLee at 08:01