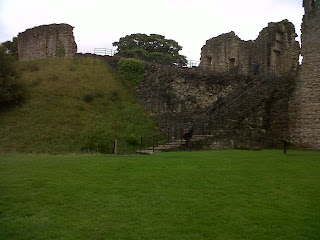 Pickering Castle was originally built in wood in 1070 after the campaign known as 'the Harrying of the North'. The location commanded trade routes north and south and dominated a landscape rich in game.

The castle was strengthened in the 13th century with a circular keep in stone. By the 14th century the site had a high stone curtain wall and corner towers.

Much of the site remains as a picturesque ruin but the scale of the site is still evident. The moat in particular is very deep and shows what an imposing statement this castle would have made on the landscape and its conquered people.

Email ThisBlogThis!Share to TwitterShare to FacebookShare to Pinterest
Labels: Museums