One thing that I have been lacking in my collection of 15mm wargame terrain are trees and woods. This has partly been due to lack of storage space and partly because I couldn't make my mind up whether to make my own trees or buy some pre-built. However having finally turned my mind to the project I was a little dismayed at the prices I came across and decided the most economical solution would be to make some myself. I decided to go down the Woodland Scenics route, mainly because I have easy access to most of the materials needed from my local branch of Model Zone. Also this very simple instructional video helped sway my decision-making...

First off let me say that the techniques and ideas listed here are not entirely my own. I searched various tutorials online when considering this project and plundered them for information. If you are considering making your own trees then I would definitely recommend looking at this post by Model Dads. It includes several videos and lots of great advice on how to get the best from your Woodland Scenics materials. Probably the best advice I took from this tutorial was to buy the WS Hob-e-tac glue. It truly is amazing stuff and makes building trees very easy. I also thought the idea of sealing the finished trees using a Matt spray varnish was excellent. Good advice, presented in an accessible format. 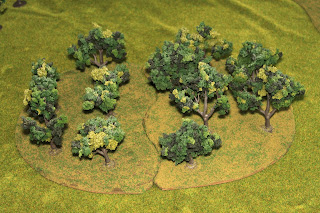 I started by collecting together all the materials I needed, primarily different coloured clump foliage and turf. I couldn't purchase the Woodland Scenics tree armatures I wanted from Model Zone so I bought them online from Antenocitis Workshop which were delivered the next day. I opted for the 3-5inch armatures (77-127mm) which roughly equates to trees about 27-44 feet in height. This a little smaller than the average heights for deciduous trees (which range from about 40-60 ft depending on species) but I think they look better proportioned when placed next to 15mm figures. The armatures twist easily to shape and come with separate bases so they can be removed during play while maintaining the 'footprint' of the tree. 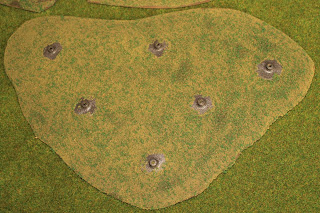 One thing I wanted to do was clearly define the edges of woodland with a nice solid base that would not be prone to being knocked out of place during play. Some months ago I was doing a bit of DIY on my daughters bedroom and needed a sheet of 4mm MDF to repair a cupboard. I ended up with a larg'ish off-cut and thought to myself "that'll come in handy" so put it aside with no clear plan for it. Now I had a use for it so I cut out several woodland bases of different shapes. These were then quickly painted with a mixture of GW Black undercoat and Flames of War/Army Painter US Armour Green.

The next step was to put aside the bases and start building the trees. The tree armatures as already mentioned come with separate plastic roots/bases which I would later fix to the wooden base boards. For now though I kept them with the trunks as I wanted to see how big the tree's looked before positioning them. They are easily twisted and arranged into shape onto which the foliage can be glued using WS's Hob-e-tac glue. This stuff looks, feels and smells like Copydex (its even applied by a built in brush) but it dries clear after about 15-20 minutes and remains incredibly tacky for hours. Be patient at this stage, if you try to stick the foliage to the glue before it has dried clear it will just fall off.

With the foliage on the armatures I then tidied them up using a small pair of plastic tweezers to pluck out any loose material and tighten up the clumps. Then I took them all outside and gave them a liberal coating of Matt spray varnish. I then left these overnight to dry thoroughly. This varnish helps hold all the clumps together and makes the finished tress a little more resilient to in-game handling. 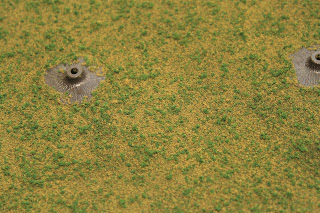 With the trees finished I removed the bases and glued them to my wooden base boards. I kept a couple of bases back for free standing trees but most were fixed to the bases. The next step was to cover the green boards with PVA glue and cover with a mixture of Woodland Scenic's Turf and Underbrush scatter material. The turf is very fine grained while the underbrush consists of 1-2mm foliage material. I like the look this gives and it helps clearly define the limits of the woods and the rough scrubby ground beneath the trees.

The whole project took me about four evenings to complete and cost about £30 in materials which worked out significantly cheaper than buying them pre made. I also think they look a lot better than many of the trees I could have bought online. Another advantage is that I still have enough material to make half a dozen more trees if needed. 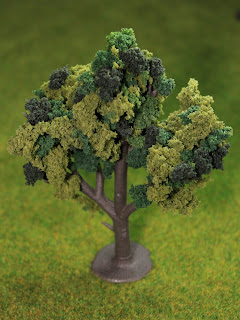 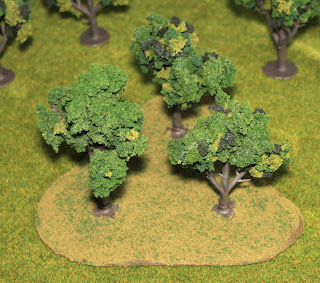