Next week I'll be up-north in Yorkshire on a family holiday. Its the first time we will have taken the kids to the area so I'm hoping they will enjoy the change of scenery (we normally holiday on the south coast of England). Of course it won't all be beaches and adventure parks... no siree! I have several interesting locations on my hit list for the week and I hope to come back with loads of pictures.

Top of the list is Eden Camp in Malton, North Yorkshire. Originally built in 1942 as a Prisoner of War camp for Italian POWs from North Africa the site later became a billet for Polish Forces in preparation for the Invasion of Europe. After D-Day the site reverted to a POW camp, this time for German prisoners. 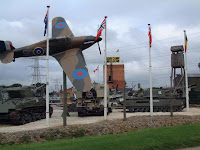 After the war it was used for a variety of industrial activities until in 1987 the site was opened as a museum of WWII history. I visited the museum in 1994 and it has grown and developed more since then. More huts have been opened with additional displays and exhibitions plus there is an interesting collection of vehicles including a Churchill and a T34. I'm looking forward to spending the day here and rest assured I will come back with lots of pictures!
﻿﻿﻿
﻿﻿﻿Although I havn't prepared any scheduled posts in advance for next week don't expect things to go completly silent on BLMA. I tested out the Blogger email posting feature earlier in the week and I should be able to keep in touch with pictures and brief write ups while I'm away. I'm actually on holiday for two weeks but the second week we will be home and relaxing. I'll try and get some more detailed pictures up on this blog as soon as I can after we return.
Posted by BigLee at 09:01