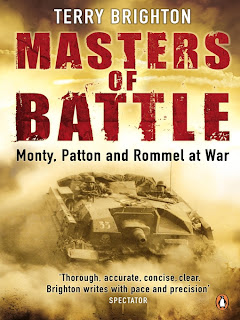 Masters of Battle: Monty, Patton and Rommel at War by Terry Brighton was insightful and infuriating in equal measure. Its a great book, easy to read with lost of interesting details. But for me there was a slight bias in the way that these three WWII Generals were portrayed.

Brighton concludes that while Monty was undoubtedly a master of organisation and supervision he was a very hard man to like. He certainly wasn't a hands on master tactician like Rommel or driver of men like Patton, and he most definitely wasn't a man who appreciated the Political intricacy's of an Alliance facing Germany. But even Brighton agrees that only Monty's hand in the Normandy landings could have swung the balance in so far in favour of the invaders.

Patton meanwhile was the ideal man to lead an American Blitzkrieg. Wild, reckless and profane he not only lead from the front but drove his army along on force of will [and careful husbandry of Fuel] alone. Rommel is portrayed as a General who remained loyal to Hitler but was also increasingly realistic about Germany's prospects after the allies successful Grossinvasion.

The book follows all three men through their careers in simultaneous chronological order so you can see where each began, the turning points in their careers and their mutual encounters. But it is Patton who leaps off the pages and steals the limelight. I'm not a fan of Patton but its hard not to laugh occasionally at the shear exuberance and outrageousness of his words. His personality and ego were more than adequate to the tasks set him and I have little doubt that if he was let off the leash - as he once half jokingly said to Eisenhower - he could be in Moscow in 30 days, he would have been.

Having now completed the book I am struck by one incredible thought. With Monty and Eisenhower increasingly at loggerheads; and almost open warfare between Monty and Patton; how the hell did we win the war? The simple answer is that once the Normandy landings had succeeded in establishing a bridgehead in Europe the war became a battle of attrition. This was a war that Germany, with ever dwindling resources, could not win. Against the might of both the British Empire and the new emerging American superpower against it, Nazi Germany's days were numbered.

I think different readers will get different things from this book depending on his or her own prejudices. For me Patton's anti-British rhetoric was hard to warm too and Monty's self aggrandisement was hard to swallow. Rommel, for a long time portrayed as 'the good German', still comes across as a man of honour, but his image is tarnished by his clear devotion to Hitler almost to the end. The story of these three men is interesting and complex and I think this book would make a good starting point from which to look at each general in detail.
Posted by BigLee at 09:01