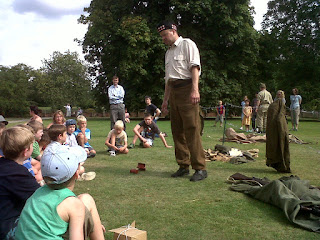 Today my family and I are at Eltham Palace. This English Heritage house is one of my favourite buildings combining the remains of a Medieval palace and an Art Deco 1920's home.

EH are running a series of events for kids called 'Time Travellers' and today's event is all about WWII. This picture is of a very interesting talk about bomb disposal. The kids were engaged and listened silently for at least forty minutes and as any parent will tell you getting kids to sit still for more than five minutes is a feat in itself.

The talk was especially relevant as the wartime owner of the house was too old to join the regular army. Instead he joined the local Home Guard and became a fIre watcher. One night incendiary bombs were dropped on the roof of his own house and with the help of his staff put the fire out. The scorch marks from melted lead can still be seen on the wooden floor of the balcony overlooking the Great Hall.