I've spent the past week working in the Esso Refinery at Fawley in Hampshire while staying near Ringwood. My morning commute has taken me through the heart of the New Forest - not a bad way to start the day. For obvious reasons the areas natural history is well known, but over the last few days I have discovered a little about the areas Military History as well.

I tried to visit the site of Beaulieu Airbase but that morning the rain was hammering down. I found a small plaque which I suspect games some details of the site and I thought to myself "shall I get out while its raining like this?". My Id replied "Wot? Yer avin a giraffe mate!" [For those that can't speak cockney like this translates as "You're joking aren't you".

Beaulieu  Airfield was built in 1942 and was initially used mainly as a base for anti-submarine patrol work. In February 1944 the airfield transferred to 2nd Tactical Air Force for preparation for D-Day. Another change in command in March 1944 saw the arrival of the 9th US Air Force who stayed until the end of August. Following the departure of USAAF, in December 1944 the Airborne Forces Experimental Establishment (AFEE) arrived. The last air units were transferred out in 1950 and the site was put under Care and Maintenance. Beaulieu remained inactive until November 1959 when it was finally handed back to the Forestry Commission. 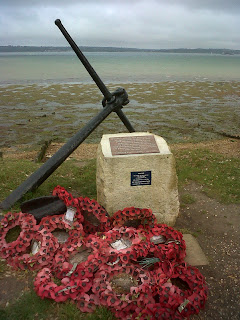 Another location I visited was Lepe Country Park on the coast facing the Solent and the Isle of Wight. Today at Lepe you can still see plenty of evidence of wartime activity. Lepe played three important roles in the D-Day landing, as a major departure point for troops, vehicles and supplies; as a construction site for part of the prefabricated floating Mulberry Harbor; and as the mainline base for the P.L.U.T.O pipeline. There is a small memorial by the car park and when I visited poppy wreaths were still in place from the D-Day services the week earlier.

The following list (lifted from this website) shows just how much still remains to be seen along this small stretch of coastline:


There are plenty more wartime sites in the area and I hope to visit more on future trips to the area.
Posted by BigLee at 09:01