Round the Old Campfire

It was another quiet weekend, in an ocean of quiet weekends. I've had a stinker of a head cold and spent most of Saturday afternoon asleep. What a wimp! Considering I have only just finished a five week course of Antibiotics for my Gammy Leg I'm amazed I was able to catch anything.

Fortunately the cold kicked in after the Dagenham Dungeon Delvers bi-weekly D&D game on Friday. Last game we defeated a Mind Flayer and his minions only to have one of our party killed in the last moments of combat. Now down to four PC's, and unable to return back to the Dwarven city we had passed through earlier, we decide to press on towards our real objective. Extricating ourselves from the Dwarven fungi mines we were exploring, we continue along the trade tunnels towards Faltikan. Then - almost as if the gods knew we were one adventurer short of a full team - a lone Elven Ranger steps from the shadows and offers his services.

I was tempted to make him interview for the position but we eventually settled for a little chat and he was in. Long story short we got into some inevitable bother and the Rangers archery skills were put to the test properly. The group were divided by a rockfall and had to follow separate routes to a surface rendezvous. The smaller party had to sneak past a group of noisy and very dangerous Ogres. The real problem was getting by the guard at the tunnel exit onto the surface. Fortunately the other half of the party arrived on the surface nearby and were able to join in the fight at the cave entrance. 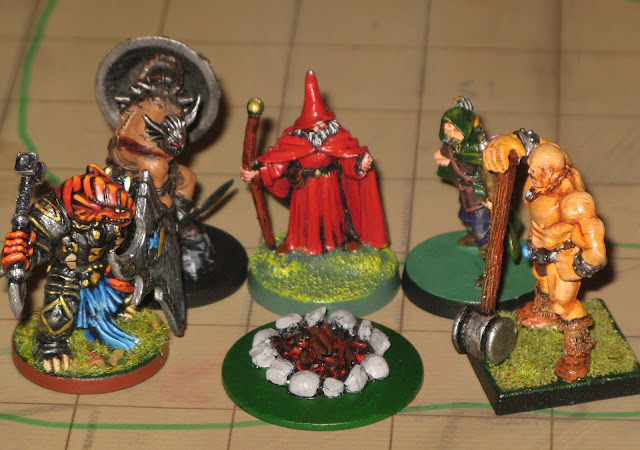 Victory achieved the group soon retired a short distance and set up camp on the edge of a nasty looking swamp. The adventurers camp has become a staple of our games with night watches being set and fires lit. Of course we were attacked during the night by more ogres who stupidly sought to avenge themselves upon us. Needless to say our PC's were very soon tucked up safe in their bedrolls having sent the night stalkers running.
Posted by BigLee at 09:01