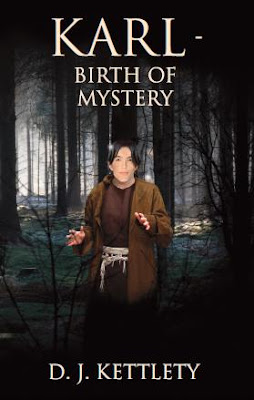 Once again I bow before the talent of my friends. This time my good friend, fellow blogger and member of the Dagenham Dungeon Delvers, Derek has written and published a book based on one of his D&D characters. Its the first of a trilogy with Part 2 already nearly finished and part 3 well into development. Here's what Derek has to say about the book:

"Karl Axilion was the first character I played in a fantasy RPG. He needed a back story as he joined into an existing campaign. Then many years later when a new campaign started a new GM (who was a player in that old game) suggested I dust off Karl, revamp the story and use him in the new setting. So I did. I took the character, re-worked the story a bit and introduced him into that campaign, into a whole new specially created world.

This story is again a piece of the original, a piece of the new and a whole lot more besides. It is not a blow by blow account of the game. This is the first part of a trilogy, and is completely removed from the games, just borrowing favourite characters and using them for my own devices. Book two is almost complete and the third is well plotted out to conclusion."

How cool is that! I've already ordered my copy and look forward to discovering a little more about a character I adventured with and thought I knew fairly well. More details can be found on Dereks blog, JK's Fantasy World and pre-orders for this book can be placed via the Hundred Publishing Website.
Posted by BigLee at 19:14