A Fine Night for Tanks 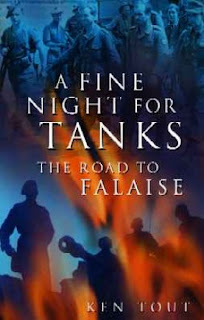 I've just finished reading A Fine Night For Tanks : The Road to Falaise by Ken Tout. Ken Tout is a former tank soldier and author of several best-selling books about tank warfare and a few years ago he appeared in the BBC series War Walks.

This book looks in detail at Operation Totalize and shows how it was a resounding success. Lots of histories of the Normandy campaign discuss the American breakout in operation Cobra as if it was the only success in the whole campaign. This book shows that without operation Totalize the allies would never have closed the jaws of their pincer, trapping huge numbers of Germans in the Falaise pocket.

On 7 August 1944, the Canadian Army, reinforced with British Army units, sent four armored columns south of Caen. The allies fully appreciated the superb defensive abilities of the Germans facing them combined with the fact that they held the high ground). To answer the question of how to negate the deadly firepower of the Panzer's, self propelled guns and the deadly 88's the allies came up with an innovative plan that neutralised the German defense in depth. The concept of the Night March was developed.

The solution was to launch an unprecedented armored attack at night. Tracer fire would mark the boundaries of the assault lanes, strategic bombers would blast a path to the German rear, pockets of resistance were encircled, and support infantry would be given armoured carriers to get them to their objectives unmolested. This was the allied version of Blitzkrieg and like its German predecessors its success relied on audacity, surprise and overwhelming firepower concentrated in a precise area.

In the inevitable German counter-attack that followed the elite Wittman Tiger Troop was destroyed and the armoured assault of Panzer Meyer was blunted.

I've read several books by Tout before and this is as well researched and detailed as those other works. One of the things I like most about his writing is that he shows that amidst such huge events every mans experience was personal. From some the Night March was marked by confusion, disorientation and noise. For others it was a brutal and terrifying ride in the dark behind enemy lines. And for many of the German defenders this was their first taste of Blitzkrieg turned against them.