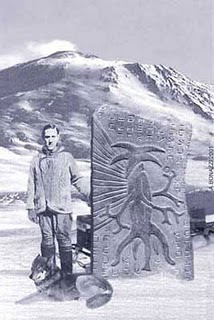 On Friday I mentioned the news that James Cameron (Alien, Terminator 2, Avatar) is getting involved in the making of H.P.Lovecraft's masterpiece At the Mountains of Madness. At the moment he is teaming up with Guillermo del Toro (Hellboy, Pans Labyrinth, Hellboy II) for a slated release date sometime in 2013. At this stage I don't know what his involvement is, there are no roles cast and no apparent script yet (not according to the articles I have read anyway).


I'm both excited and terrified by this announcement. Not 'sanity destroying' terrified, but deeply worried non-the-less. The quality of work from both these writer-directors is unquestioned and there is little doubt that if they make this film it will be slick, big budget and entertaining. But I fear that Hollywood will do what it does to most niche genre films and will try to "make it more relevant to viewers". This usually involves inserting a precocious child into the plot, or worse still, telling the story in a modern setting. And its this latter possibility that scares me the most.
Imagine this. A group of modern day Antarctic scientists fly in for a weekend of exploration. They don't discover the bodies of the Old Ones by drilling boreholes because they use radar to map everything below the surface in a few seconds. When they do dig up the 'fossil' of an Old One they Tweet the news to their colleges and post pictures of their discovery on the University Facebook page. Then some bright spark decides to explore the mountains using satellite photo's and Bam! they discover the lost city of the old ones within minutes. The TV crews arrive a few hours later.... 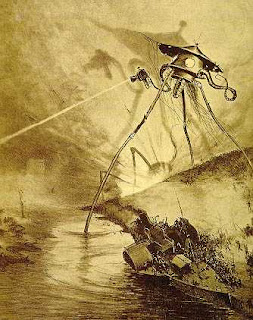 It doesn't work does it? I expect the film executives will justify such blatant abuse of a classic of literature with some nonsense about connecting a new generation of readers with Lovecraft's work. Utter rubbish. Some stories need to be told in the setting in which they were written. I believe that the fantastic stories of Lovecraft, HG Wells, Jules Vern etc would still work with a modern audience because, not despite of, the fact that there is a disconnect with the audience.
We live in an electronic age that makes the science and technology of the Victorian and Edwardian eras (and even the interwar years) mysterious and unfathomable to many people. The growing popularity of 'Steampunk' and colonial wargaming is a testament to the untapped fan base that imagination, nostalgia and a fascination with old-tech has created. These are fantasy stories at the end of the day and part of the fun of Fantasy is that it takes the reader or viewer (or gamer for that matter) out of their normal life, and away from the stress of the 24/7, news saturated, instant access, social media rat race.
OK. Rant over. For the record I enjoyed the 2005 version of War of the Worlds but it would be nice, just once, not to leave the cinema saying "it would have been better if they had stuck to the book".
Posted by BigLee at 09:01