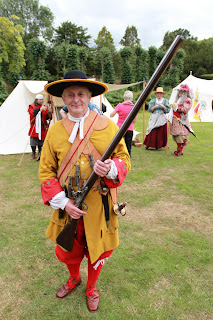 I had an interesting encounter a few days ago when I went to a Civil War living history event. My wife and I had a day without the kids so decided to visit a historical house near Chelmsford, Ingatestone Hall. It so happened that they were hosting the Essex Militia (a Civil War era Living history group) that weekend and we had a chance to meet and talk to some of its members.

Ingatestone Hall was built in about 1541 by Sir William Petre and has remained in the family possession for 18 generations. The current Baron Petre is also the Lord Lieutenant of Essex. While still remaining a private residence a large portion of the house and grounds are open to the public on specified days and several events, including reenactments, take place throughout the year.

The Essex Militia is a historical living history group, that covers the time period from James I through to James II (the years 1603 to 1703) and have become a regular feature at the Hall. There were only a few members present but all were happy to talk with visitors and were showing off various period skills from wig making through to herbalism and of course the martial occupations. 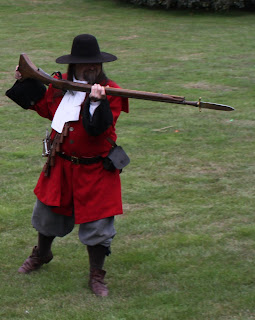 These flintlock muskets had an accurate or effective range of about 50 yards but without rifled barrels they were not accurate. Instead armies relied on massed units of troops firing in unison and at close range. All the reenactors were having problems keeping their powder dry on the day we visited as it was very humid. They assured me that aside from grain size (its regularity coming from modern machine milling methods) the black power they use is essentially the same as that used during the time period they represent.

One of the things that was quickly evident was the amount of smoke generated by just a few muskets. On a battlefield with hundreds of musketeers visibility would have been reduced to virtually nil. A small comfort for soldiers that had to close to less than 150 feet before firing at the enemy.

Our visit to Ingatestone was cut short by the weather but it was an interesting visit none the less. On a slightly bizarre side note I had a long chat with one of the members of the Militia (the guy pictured at the top in the Tan coloured coat) and couldn't shake off the feeling that I had seen him before. I never said anything at the time but it bugged me all day until I realised who he reminded me of. Is it just me or does he look like Emperor Palpatine? 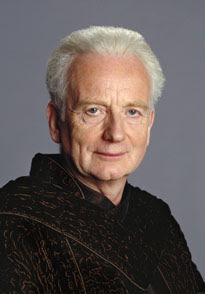 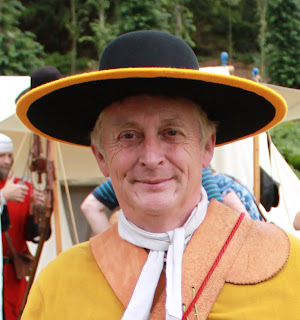