My Brother-in-law and I are currently building armies to fight a Normandy campaign using the Flames of War rules. One essential ingredient in any such battles is terrain and in particular the Bocage hedgerows which typified the area around the beachheads. I looked briefly at buying some pre made Bocage terrain but quickly dismissed this as an expensive option. Instead I decided to have a go at making my own Bocage, and this is how I did it. 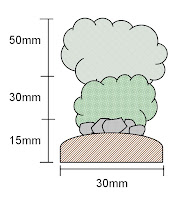 First off I decided the dimensions to aim for. I referred to descriptions given in various first hand accounts of fighting in the Bocage, and some modeling guides from the FoW website. The Bocage typically consisted of an earthen bank topped with stones and rocks with tall hedges and trees along its crest. To recreate this in 15mm scale I decided the earth bank should be about 10mm high coming to 15mm with the stone top. The hedges would rise another 10-15mm on top of that with trees up to another 20mm above that. The overall average height would therefore be between 25-30mm with some tree filled sections rising to 50mm from ground level. Significant obstacles indeed.

For the earth bank I wanted a material that was durable and would form a strong base on which to put everything else. I opted for shaped wooden mouldings which came in 2.4m lengths. I chose two sizes which when glued together would create a wide bank with a central ridge. The topmost part would later have stones glued on and the lower slopes would eventually be covered in static grass. 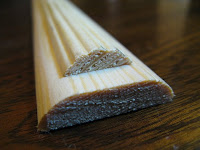 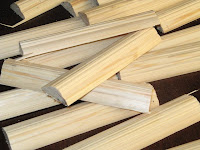 With both sections firmly glued together I then cut the whole thing into sixteen 15mm sections. The upper ridge of each section was coated in PVA glue and dipped into a tray of gravel to create the rock covered crest for the bank. The whole section was then then spray primed in black and left to dry thoroughly. 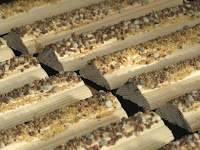 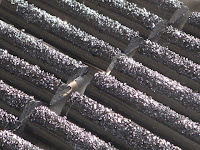 The stony crest was then dry brushed in different shades of grey several times to accentuate the rocks. The grass covered earth bank either side of the crest was painted dark green and then covered with static grass. Now all that was needed was the vegetation on the top. 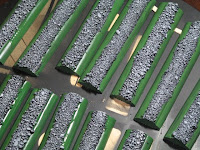 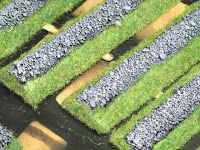 I purchased several types of clumpy 'brush' or hedge which could then be added to the crest of each section. I also found some excellent rubberised horse-hair hedges. These were painted green and covered in green flock. When all this had been glues into position and dried I then touched up the hedge sections with different colour green paint and flock. The purpose of this last stage was to create an uneven and patchwork look to these ancient hedgerows.

I'm quite happy with the finished pieces especially considering how quick and easy they were to build. However I will have to make more - corners and T sections for instance - and have several ideas for improvements on the next batch. 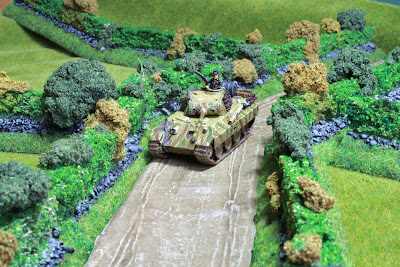 The cost of materials was relatively low. The wood cost about £7.50; Static Grass and Gravel I already had in stock but replacement material cost me £5.00; vegetation/hedge material came to a little under £10 and I still have plenty left for other projects. In total I spent about £22 to make 2.4 meters (94 inches) of bocage. I looked at various pre-made options for sale and the equivalent length would have cost between £70-100 depending on where I bought them.