By Tank into Normandy

This first hand account of the invasion of German occupied France in 1944 takes the reader from the cricket fields of an English boarding school through D-Day and onwards to the end of the war. Stuart Hills has an easy way with words that carries the reader through the adventure, danger, loss and exhilaration experienced by all that took part in this massive undertaking.

The opening chapters concentrate on Hill's early years, growing up part of an upper middle class colonial family in Hong Kong and later at school back in England. His upbringing seemed to me to be the very antithesis of my firmly working class, family oriented, background. But as his story unfolded I felt myself warming to his character and I appreciated something of the enormous personal journey that he went through as a young officer (hills turned 21 while serving in Belgium).

Start Hills was commissioned in the Sherwood Rangers in 1944 having passed through Sandhurst after joining up in 1942. He was assigned command of a DD (Duplex Drive) Amphibious Sherman but his tank was damaged by artillery fire and sank before it reached the shore. Hills and his crew escaped to a dingy and were rescued by an armed landing craft. The next day (D+1) they took another dingy and managed to row ashore. The Beachmaster watched their arrival and commented dryly, "This is sure to swing the balance in Monty's favour. There will be consternation in Berlin." 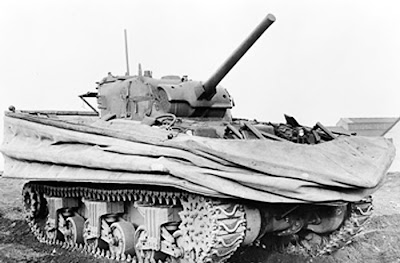 Later he was awarded the MC for action at the bitterly defended River Noireau crossing. Hills troop of three Sherman's were instrumental in taking the Berjou Ridge, overlooking the crossing, in the face accurate artillery fire and infantry defenders armed with Spandau's, Mortars and Panzerfaust's. Indeed the threat from this latter weapon seemed to be foremost in many tank commanders minds throughout the campaign to free France and later Belgium. At one point in September, Hill's men were in the main square in Gheel when it was surrounded. His Sherman took a direct hit from a Panzerfaust and he was lucky to escape with just a grazed forehead.

Throughout the book Hill takes time to describe the men and officers he served with. Some of the vignettes he paints are a bit two dimensional and its hard to put faces to the lists of names. However some notable characters do rise to the foreground as significant people in the life and experience of this young officer. These include Keith Douglas, the war poet, who - having served throughout the regiments time in north Africa - was killed on D+3 by mortar fire. Another figure who features prominently in this book is the regimental Chaplain Leslie Skinner. Padre Skinner worked tirelessly tending the spiritual needs of his comrades and personally took charge of recovering and burying those killed.

However it was the story of the loss of his best friend - Denis Elmore - in the latter part of the war, that as a reader helped me connect with him. Elmore and Hills had been friends at Tonbridge School and as young men they had found success playing cricket against their rivals, Clifton Collage, at Lords. Now, a mere three years later, they had become experienced and battle hardened soldiers in the advancing allied armies. Denis Elmore was killed in one of the last engagement's the Sherwood Rangers undertook in the war. Hills described candidly how he found himself grieving heavily for his lost friend and all the life he would miss out on.

The Historian Richard Holmes described this book as "one of the best first hand accounts of the war" and on reflection I have to agree.