Following on from my post yesterday about my love of visual aids I thought I'd better explain to the wider blogosphere my final sentence about throwing fish heads at my players. No, I wasn't having a tantrum, or getting back at them for talking during my monologues (although that does bug me). Neither was I having a moment of temporary insanity. I had a good reason. Honest. 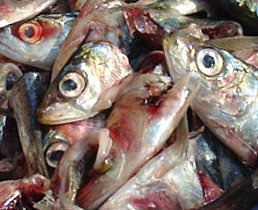 OK, the full story... The city of Deephaven is overpopulated, noisy and dirty. It's also the only city in the Isles of Ethos, a 2500 mile chain of islands which are all that remains of a once massive and populous continent. The Player Characters have been brought together to solve a murder that threatens to upset the delicate political balance between the city authorities and the real power in the city, the thieves guild. Unfortunately the PC's (and everyone else for that matter) don't realise that the murderer is an ambitious and dangerous Dark Elf bent on war and invasion. The murder victim was a nobody, but a nobody that could have unmasked her presence in the city.

The adventurers begin their investigation by exploring the city (which is new to many of them) and as they climb the steep streets they hear a commotion ahead of them. People ahead dive out of the way and reveal an out of control fish cart hurtling downhill towards them. One of the characters jumps on the fast moving cart causing it to hit a curbstone, tip over and shatter into a thousand pieces sending fish everywhere...

Now, I know that tossing a bowl of fish heads over the GM screen to land in the middle of the games table wasn't absolutely necessary...but its did elicit an excellent reaction! This was the first game of my new campaign and I wanted my players to know that the Rules of Engagement had changed! From now on they would never know what was coming over that GM screen. So you can imagine their trepidation when their PC's investigations lead them into the city's sewers!
Posted by BigLee at 12:24