When I run a game I like to use every visual aid at my disposal. First and foremost are miniatures (obviously, given the nature of this blog) and scenery items like buildings or dungeon debris. In part this is because I have always enjoyed painting scenery almost as much as character models or monsters. This was especially true when I played Warhammer and 40K and I guess I never changed even when I returned to playing Dungeons and Dragons . I still enjoy the wargame display tables at conventions as much as the stands promoting RPG's.

When I was thinking about running my own D&D campaign I quickly decided I would only do it if I could indulge my passion for miniatures and painting. At this point its worth adding that I have nothing against games that don't include these elements. I have enjoyed lots of games that have been run without the need for floor plans or scenery or miniatures of any kind. But that's not the way I wanted to run my game.

This picture was a scene from the climax of a city campaign and I used every building I owned (or could borrow) to maximise the visual impact. 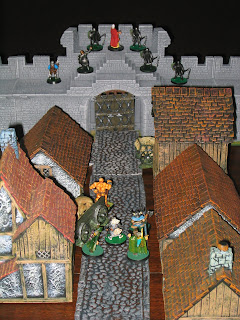 I also love to use floor plans or dungeon tiles in my games if possible. I have collected a large selection of PDF floor plans that I can print as required for set encounters, like the fungus caves shown in this photo. 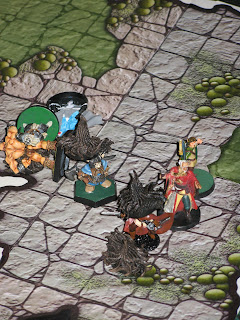 One of my favorite publishers of such tiles are Skeletonkey Games. Reasonably priced and beautifully detailed I don't think you can go wrong with their products. In my last D&D campaign I prepared tiles for a whole dungeon complex for the princely sum of seven dollars.
When I haven't got the time or the resources to make floor tiles I'm not above photocopying maps from supplements and printing them out to make floor plans. This is part of a castle called Overlook that featured in Dungeon magazine back when it was still in print. I adapted the encounter to my own campaign and enlarged the map provided to make a relatively quick and easy floor plan. 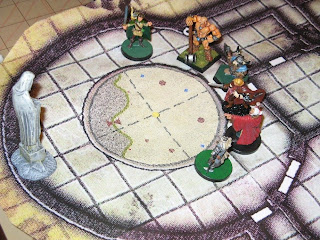 Of course all this extra effort is totally unnecessary for a Roleplaying game like D&D but I guarantee that players won't forget an encounter that looks like this... 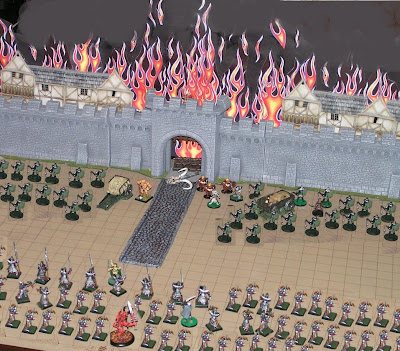 Of course my players also won't forget the time I threw real fish heads at them over the GM screen... but that's another story.
Posted by BigLee at 11:01