Week five of the Painting Challenge and I managed to complete two projects that I had been looking forward to doing for a while. As last week I have a mix of Fantasy and Historical figures to show off, in two different scales. The big news of the week, however, has nothing to do with miniatures as I spent part of Saturday morning getting my first dose of the Phizer Vaccine. Because of my job, I'm classed as a key worker and, along with my colleagues, was able to get my 'jab' a little earlier than I otherwise would have. Hopefully, my wife will have hers soon as well, and then we can breathe a little easier knowing we have at least some protection. One small step back to normality and an important antidote to the January blues!

My entry for this room in the Chambers of Challenge is a modest homage to all those brave Goblin treasure guards that countless adventurers have encountered in dungeons from the earliest days of D&D right up to the present. Every dungeon seems to have a lone Goblin guarding a treasure chest in a 10x10 room, seemingly just waiting for a bunch of 'hero's' to come along and slaughter him and steal the treasure. These brave keyholders have too long gone unsung, unrespected & unrecognised! 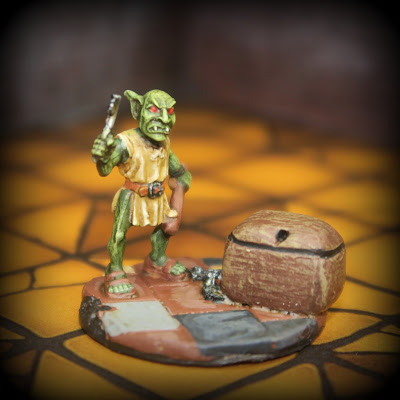 This little guy is from Midlam Miniatures, which if you don't know them, do a wonderfully eclectic mix of fantasy figures suitable for dungeon crawling. Many of their figures are quirky and unique...making them ideal fodder for the bonus rounds! I've got quite a few Midlam figures stashed away for future Challenges. Mind you they are such fun figures to paint its hard to say of they'll last that long in my lead mountain. 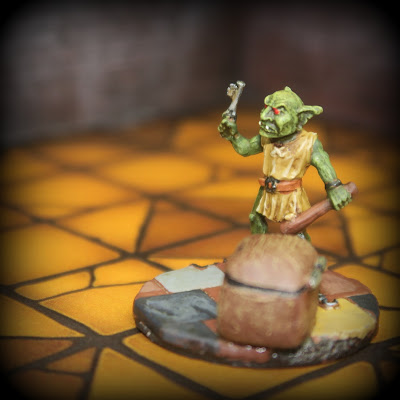 I wanted to add a Treasure Chest to the base but I painted up all the ones I had last year. So, in the end, I decided to make a chest myself using Milliput. Not the greatest looking bit of sculpting, but it sets off the resin base nicely. This guy will also be my 'Entry Fee' figure for the Challenge, so it'll net a few extra points on top of the CoC Bonus...seems appropriate that I should get some extra 'treasure' by painting him!

Last week I posted pictures of my Airborne Platoon for use with Chain of Command and this week I have a few jeeps to add to the mix. These would be delivered to the landing zone in specially adapted gliders which could be broken in two to release the heavy load inside. I have been looking forward to painting these, and while some of the detailing on the figures wasn't as good as on the infantry I did last week, I'm still happy with them. 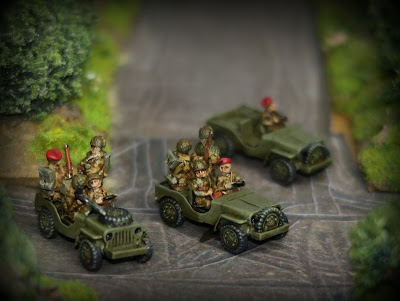 I've modelled three vehicles, one with Bren Team, one with a small rifle team and the last one empty, to be used when a jeep has delivered its passengers. 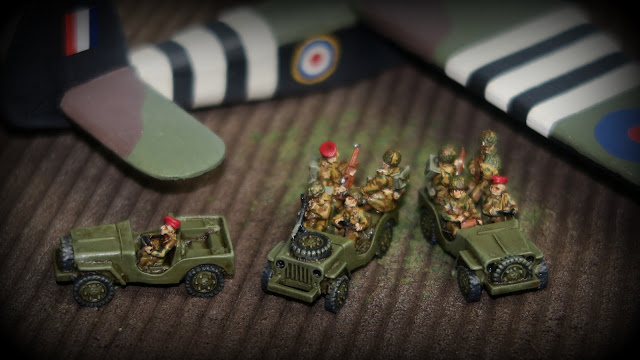 These models are from Skytrex and came with a selection of crew to put in them. On their website, it shows the vehicles with its passengers sat with their legs inside the vehicles, but I've seen several pictures with then sat the other way around, legs over the sides, presumably ready to leap off at a moments notice. I was in a real quandary about how to assemble these but in the end, I found enough period photo's showing them as Skytrex had them set so I went with "arms and legs inside the vehicle at all times". I actually had some feedback on the Challenge blog from some of the challenges that have ridden a jeep exactly like this, confirming it is the safest way to stay inside the vehicle!

Progress towards my points target continues to be good (with a boost this week) so next week I expect to be easing off the gas a little and enjoying a few fun figures for the Chambers of Challenge bonus rounds.