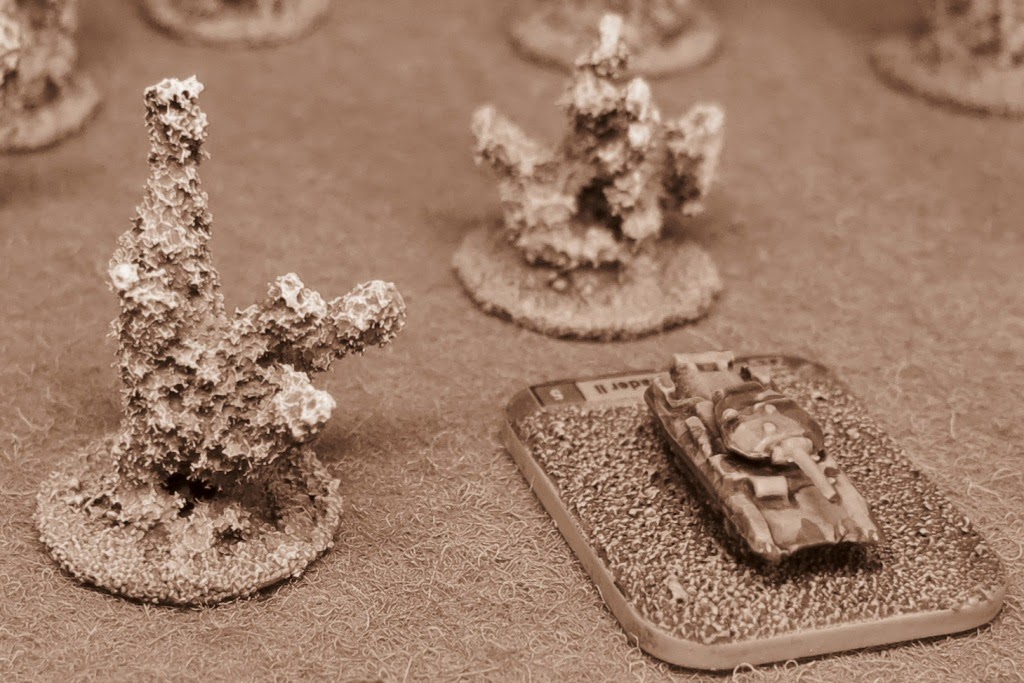 Another little project has come to fruition after spending some time on the drawing board. I wanted to make some small explosion markers for my 6mm North African desert games. Unlike the smoke markers I made last year to show knocked out vehicles these markers are not columns of smoke but much more dynamic bursts of dust and rock caused from either mines, artillery fire or bombs dropped from aircraft. I was inspired by several recent documentaries I have watched in which troops and tanks are shown during artillery barrages and it struck me that while Hollywood depicts every explosion as a fireball with black smoke, in reality many of the explosions I saw were just clouds of dust and flying rocks.

Here are a few examples of pictures taken in North Africa during WWII and they amply illustrate what I wanted to achieved with my new explosion models. I will still use the black smoke markers to show knocked out vehicles but for barrages that just hit dirt I need something a little different.


I have basically used a similar technique making explosions to that which I employed for my Smoke Markers. However unlike a fast rising column of hot smoke, the explosion markers are smaller and much more dynamic bursts of dust. The below picture shows the various stages of the construction that I used, followed by a set of detailed step by step instructions:

(1) Create an armature on which to model the explosion

(3) Base paint the model

I think the finished results look pretty good and now that I have made a test batch I'll crank up production and turn out a dozen or so more to use in my games.

Improvised FOW Rule
There isn't a specific rule in FOW about Line of Sight being obscured by dust from Barrages, but there are plenty of contemporary accounts describing the almost fog like effect of heavy shelling in the desert. I'll use a modified version of the existing Dust rules to simulate the effect on visibility that such attacks caused.