All going well I should be at SELWG this Sunday along with several other of the Rejects. After the success I had last year on the Bring and Buy I decided to give it another go this year. I don't have any models to sell this time but instead thought I'd clear a few DVD's and computer games. I've deliberately tried to price these low to guarantee a sale, plus I like the idea of fellow wargamer's at the show going home with a bargain or two. And of course the organisers get a commission by running the B&B so its a 'win' all round I think. 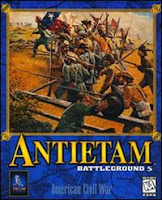 Battleground PC Games            £10.00
These classic PC games have been around for a long time. I tested them recently and they still run fine on Windows Vista and Win 7 OS systems and although they are a little dated now they are still very enjoyable games. The set included 6 CD games including four ACW battles (Antietam, Shiloh, Bull Run, Gettysburg) and two Napoleonic (Waterloo and Napoleon in Russia). I've enjoyed them all but especially the Antietam game which was as bloody and as hard as the historical battle.

Pro Fantasy Software Bundle    £10.00
Back when I was running my own D&D campaign I had the mad idea that I would make all my own maps. So I bought Campaign Cartographer from Profantasy Software. I can't remember exactly what I paid for them but the latest version is retailing at £29.95. Similarly the City Designer and Dungeon Designer Pro retail for £28 each. I'm selling all three for a tenner and even though they aren't the latest versions I still thinks that represents a bargain in anybody's book.

PC Game Bundle                        £10.00
The fourth lot is a four game bundle. All are PC games and include a fairly eclectic mix of genre's but I'm sure there will be at least one in the pack to suit most gamers. Medal of Honor: Airborne, Praetorians, Medieval Total War and Tank Simulator

Hot Lead: Painting DVD           £10.00
This one is the real bargain as far as I'm concerned. Hot Lead : How to paint a Better Miniature is a triple DVD tutorial by american artist Laszlo Jakusovsky. The three DVD's include over 8 hours of advice covering everything from basic techniques through to very advanced painting styles. This DVD is still available online and is currently selling at $40/£25 plus postage and I'm passing it on for a mere ten of your pounds.

I'm also selling a couple of books for a few quid each just to cover the commission charges. All money raised will of course be ploughed back into my hobby, in this case some more of the 4Ground MDF buildings and of course more miniatures!
Posted by BigLee at 15:51