Bases and base dressing is as important for 6mm or micro armour miniatures as it is for 15mm or 28mm figures. Good basing can make a well painted army look fantastic and can even make a mediocre painted model look impressive. Back in the early days of wargaming it was an often overlooked part of modelling but in recent years it has been increasingly recognised by gamers as an important element of army painting. So when I decided to buy and paint two new armies for 6mm micro armour wargames set in the Western Desert in WWII I knew I needed to get the base design right as early as possible. 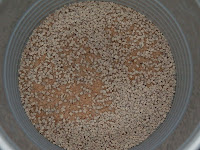 I painted my first 6mm tanks a couple of weeks ago but held off from basing them until I had made some choices about design. The idea being that whatever base design I settled upon would be the standard that I would use for the whole army whether I painted models for it now or in a years time. I want a consistent look across my armies even if I continue to build and paint for them for many years to come. First off I made up a batch of mixed sand and modelling gravel with roughly 2 parts sand to one part gravel (Woodland Scenic's medium Tallus).

Once I had created my basing gravel I added it to several bases so I could experiment with a range of base colours and highlights until I had found the 'right' shades. Below are some examples of the different combinations I tried.


In the end I went with Test Diii (Base - 921 English Uniform, Mid Tone - 912 Tan Yellow, Highlight - 918 Ivory) but to be absolutely sure I then painted up a set of bases to check the consistency of my method and the finished look on a whole set of bases. I have made these with a flat area on one edge so I can add a label.

I appreciate my choice of colours may not be to everyone's taste but it looks right to me. I wanted something light but with some depth of colour and variation in texture that would represent the rocky and barren ground of the Western Desert. So long as I am consistent with this pallet in future I think it will look really good across the two armies I will be painting.


Now I will go and fix my first batch of tanks to their new bases. I still have a little more work to do - all the bases will need to be labelled and I will then varnish and add Dullcoat to protect the paintwork - but hopefully I can put some pictures up soon.
Posted by BigLee at 16:06