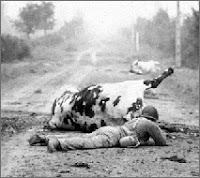 Normandy 1944 and the drone of aircraft cannot drown the noise of 15 inch shells ripping across the sky towards targets inland. The Overlord invasion fleet is supported by 17 cruisers and battleships whose massive guns are now trained on land based targets. The thunderous noise of their bombardment rolls up and down the coast cloaking the land in dust and smoke. The shells detonate large minefields, knock out defensive positions and flip 40 ton tanks in the air like toys. The shock waves also wipe out whole herds of cattle in their fields leaving little or no evidence of what killed them.

The image of dead and bloated cattle in the fields of Normandy is one that crops up time and again in old photographs. Its also been used several times in war films such as Saving Private Ryan and the HBO series Band of Brothers. They have no in-game significance or special rules (at least not in FOW) but I decided to buy some as 'set-dressing' for my Normandy tabletop. These models are made by Peter Pig from their scenery range and cost just £2.60 for six deceased bovine's. 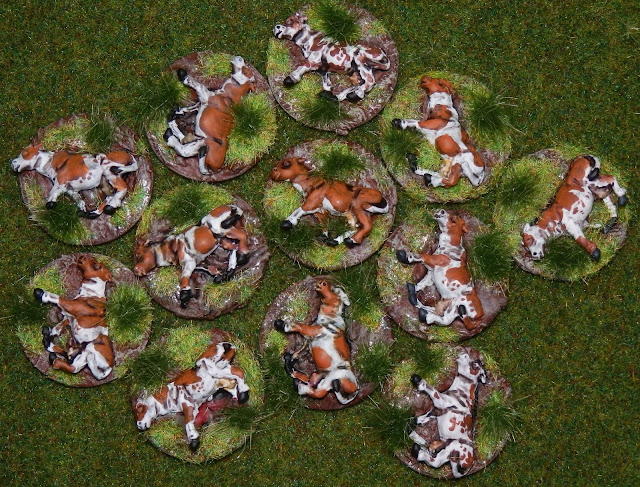 The traditional Norman cow is reddish brown and white, although there can be enormous variation in patterning from one cow to another. There is an excellent guide to painting these very models on the Model Dads Blog here. 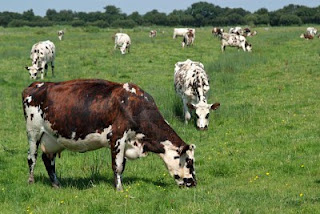 The breed has its origin in cattle that were brought to Normandy by the Viking conquerors in the 9th and 10th centuries. They are dual-purpose cattle and provide rich milk for the French cheese industry while their large stocky frames mean they are also valued for their meat.

The Normande cow was decimated by the Allied invasion and almost died out as competing breeds were brought into the area after the war. However the breed has made a comeback and it is estimated there are now 3 million in Northern France.
Posted by BigLee at 08:01