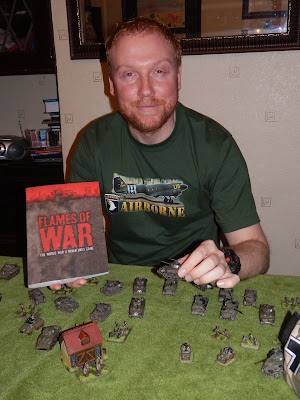 Ray and I got together on Saturday and had our first play with the new 3rd Edition Flames of War rules. Although we have played a couple of games with 2nd we haven't really had a chance to get them under our belt and play a proper full-on game. This session was more about play-testing and working through some of the rules as we knew in advance that we wouldn't have time for a full on game.

As predicted we didn't have a lot of time, due to the fact that were were also babysitting our youngest children (my wife, his partner and my eldest daughter having gone into London to shop for a Prom Dress!). For Ray and I most of the day was spent running around after and pandering to the little-uns so we probably only had an hour or so actual play with the rules. I'm not complaining though because the kids were very well behaved and actually are a pleasure to look after. Plus of course we earned ourselves a heap load of 'brownie points' to cash in next time we want a day out at a wargames show or vehicle rally.

In between feeding and playing with the rug-rats Ray and I did get plenty of time to discuss the game and the new rules even if we didn't get much opportunity to move models around the tabletop. We jointly looked through the opening chapters of the new rulebook and I think we both agreed that its design and layout is excellent. This was the first time Ray had seen the new rules and like me I think Ray felt that the new illustrations of the rules really do make learning them a lot easier.

I went to Skirmish a Toy and Model Soldier Show in Sidcup this morning (more on that later) and was able to buy a second copy of the mini-rulebook which I'll give to Ray. Hopefully this will encourage him to learn the rules independently and make running our first game a lot easier. I'm not sure when that will be though. Ray and I are going to Tiger Day at the end of the month and we may need to save up some more Points first..!
Posted by BigLee at 16:01

Email ThisBlogThis!Share to TwitterShare to FacebookShare to Pinterest
Labels: FoW