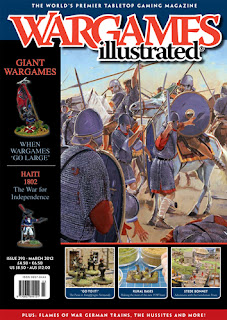 The March Issue of Wargames Illustrated arrived on my doorstep last week and I'd almost forgotten to write about it because I have been so absorbed with the FOW 3rd Edition rules (more on this later). The gods of fate are cruel and both the new rulebook and WI 293 arrived within an hour of my leaving on a business trip to Southampton. My wife texted me to say they had been delivered, by which time I was 50 miles away negotiating traffic on the world largest car park (the M25).

This months Theme are large wargames fought on giant tables. So we get three articles covering different periods but each played out on the sort of games table that most of us would kill to own. The first article looks at Dettingen, Jun 1743 which occurred during the War of the Austrian Succession. The game was played by Worcester Wargames Club and featured thousands of miniatures over a huge L shaped table. The level of work and detail that went onto this game made the article fun to read and certainly made me wish I'd been in on it!

The second game was The Empire Cracks, 406AD and recreates a section of the Rhine near Mainz which is being crossed by a mixed band of Barbarian tribes. This marked a significant moment in the decline of Roman power in Northern Gaul. The table fought over is 8 foot wide and a huge 22 foot long and covered from one end to the next with detailed terrain including a Roman Fort guarding the river crossing and a former roman town now in the hands of the Barbarians.

The third and final game featured was Chancellorsville, May 1863 and was fought across several tables each representing a different section of the battlefield. The game used the Black Powder rules and featured two umpires, 15 players and over 6000 figures. A truly spectacular game and the article is full of mouth watering pictures.

I still have several articles left to read but this is proving to be an issue that has plenty for everyone and is sure to whet the appetite of any wargamer.
Posted by BigLee at 09:16