Flash Diffusers are vital for softening harsh shadows during flash photography but there are few examples available to buy that can be used with compact digital cameras. Here's my simple home made flash diffuser that can easily be adapted to fit almost any camera, and all it will cost you is a tube of crisps!

I've written before about the benefits of using a flash diffuser when photographing miniatures. Simply put, a flash diffuser spreads the light from the flash of a camera so that the light does not come from one concentrated source. The nett result is that the light is 'softened', hard shadows are reduced and colours are slightly warmer. Diffuser's also block some of the light from the flash thereby reducing the range of the flashgun or built in flash head. This is a boon to the miniatures photographer as it means that built in flash can be used for macro photography at much closer ranges than non diffused flash. With a little bit of experimentation it won't take you long to work out the effective range of your softened flash and begin to get much better pictures as a result.

I bought myself a great diffuser for use with my SLR and carry it with me whenever I take that kit out. But carrying a full SLR kitbag around a convention can be heavy and cumbersome, and recently I have found it much easier to use my compact Olympus SZ-30MR instead. Small, light and with a wide range of features it is ideal for show photography in every respect bar one - the flash is too harsh for macro Photography. There are few commercial flash diffuser's on the market for compact cameras so I had to fall back on a bit of creative ingenuity and DIY to make one. 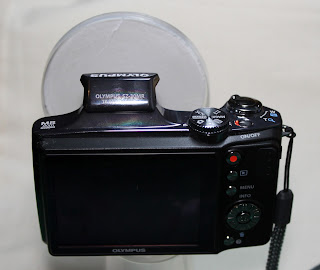 As already stated the single purpose of a diffuser is to soften the flash by creating a larger light source (the surface of the diffuser being several times the surface of the flash). So all that I needed was an opaque surface through which the light could travel, held slightly in front of the flash head. I experimented with various options eventually settling on what I call The Pringle's Solution. I love those round plastic lids from Pringle crisp tins. I use them to mix paint or glue in, they get used as coasters for my coffee cup and now as the basis of a simple and cheap flash diffuser.

Hold the lid over the extended lens of your camera and on the reverse side of the lid use a pencil to draw a circle that matches the lens diameter. Make sure the hole you create is on the edge of the lid so that the majority of the opaque plastic sits in front of the flash. Use a sharp blade to cut the hole out so that it is just a fraction smaller than the lens it will fit over. Some small amount of trimming may be needed to get the fit right - Too loose and the diffuser will fall off. Don't cut through the edge of the lid as this plastic rim give the finished item its rigidity. Next stick tissue paper to the inside of the lid and allow to dry.

That's it, your home-made flash diffuser is now complete and ready to be used! Here's a pictures I took at the weekend on the diffuser's first proper test run. There are still some shadows but the outlines are softer and the color's of the models are richer and properly exposed.

Warning: You will get lots of odd looks when you use this contraption, but you'll also get lots of good photo's and your diffuser will fit easily in a pocket until needed.
Posted by BigLee at 12:47