It's no secret that I'm a big fan of the literature of H.P.Lovecraft. Often described as a 'pulp' writer I think this is a rather derogatory term for such a towering figure in horror fiction. Regular readers will know that I have been off work for a couple of weeks and (in an ironic attempt to maintain my sanity) I have been working my way through Lovecraft's collected works. Today I'm reading At the Mountains of Madness having been inspired to re-read this classic by something I read on the Internet recently. 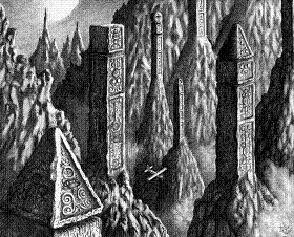 Two articles that I literally stumbled upon [ Here and Here ] announced that Guollermo del Toro, director of Hellboy and Pans Labyrinth is planning on making At the Mountains of Madness into a film. I assume this project will come after the two Hobbit films that are in production now, so this is some way off... but still. Del Toro does Lovecraft... My skin is tingling at the thought! Here's a quote from Wikipedia on this subject:

After The Hobbit and its follow-up, Del Toro is scheduled to direct four films for Universal; Frankenstein; Dr. Jekyll and Mr. Hyde; a remake of Slaughterhouse-Five; and Drood, an adaptation of a Dan Simmons novel due for publication in February 2009. He still has his sights set on filming At the Mountains of Madness by H. P. Lovecraft... Part of the Universal deal entails continuing research and development for the creatures in At the Mountains of Madness.