This week's Quarantined Wargamer video on Miniature Adventures TV is a tale of my earliest gamer origins. Long before I rolled dice or conceived of painted miniatures I had a much more basic method for playing games of war. Like many kids in the 1970's, I had plenty of Airfix 1:32 plastic soldiers to excite my imagination. My games of war were pretty basic but got considerably more sophisticated with the creation of an elastic band gun. Issued with this plywood weapon and a plentiful supply of 'ammo' no Airfix model (or sibling) was safe!
I hope you enjoy the film and of course if you do, please like, subscribe and share. Until next week, keep safe and of course, keep rolling high. 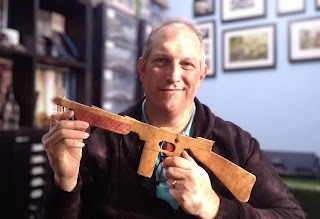 UPDATE: I thought the original elastic band guns had been lost decades ago, but I was wrong! I received a package from my sister last week and despite being wrapped I knew exactly what it was. The suspiciously gun-shaped package contained one of the plywood weapons my dad made over 40 years ago. I'll be mounting mine on the wall somewhere I can easily reach it... with a plentiful supply of rubber bands nearby of course. 😁
Posted by BigLee at 12:00