The 11th Analogue Hobbies Painting Challenge finished in the early hours of Sunday (for those of us on GMT) and my-oh-my what an incredible week it has been. I cranked out four entries this week, completed the Chambers of Challenge side quest and even revisited my Anglo-Zulu War project and painted some figures that have been taunting me from my Lead Mountain for at least three years!

Two adventurers have found a pile of unguarded treasure and each feels their hearts skip a beat. Treasure! But while one gathers up the spellbooks and tomes of ancient knowledge for the other it is the glint of gold that mesmerises him. Each to their own, and at least they aren't fighting over the treasure this way! 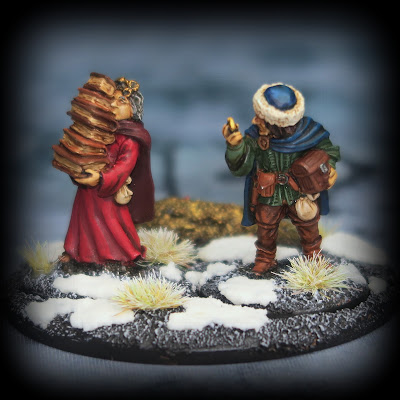 I had several models I could use for this room but in the end, I decided to use two of them and make a special base to hold them. As before I based the figures separately so they can be used in games and modelled the base from Milliput on a large round MDF base. 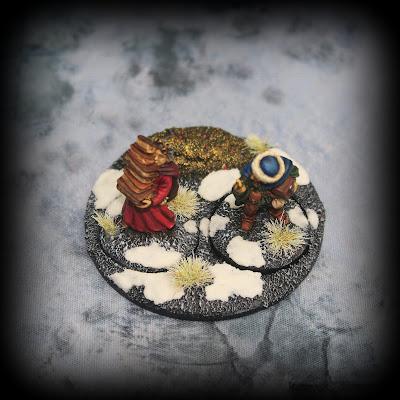 Both figures are from Midlam Miniatures, so they are about 25mm rather than 28mm, but the quality of the sculpting is wonderful. They were fun to paint up and I'm sure I can find plenty of use for them in my games.

The postman finally delivered my long-awaited parcel with my figures for the Laboratory chamber... but too late. I'd already nearly completed this offering to the Witch of this level for a second teleport, and I have started work on my figure for the next chamber The Hall of Heroes. I'm not too upset though because I will have a couple of extra female figures for my Frostgrave games and my Hero for the next room is a wonderful model that I have been wanting to paint for some time. 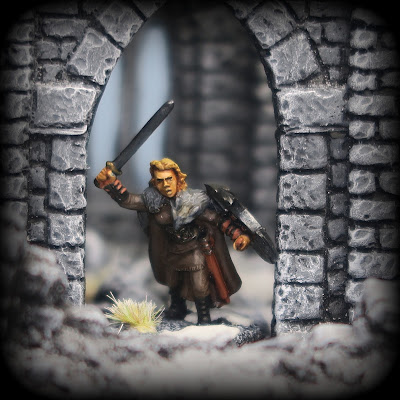 This is another figure from Bad Squiddo Games and once again is a wonderfully sculpted figure of a Shieldmaiden. When I got this model it has a round shield with it but try as I might I couldn't find it, so I found an alternative from my bitz-box. The shield is clearly influenced by Celtic designs but with a suitably 'fantastic flourish idea for a fantasy setting like Frostgrave. 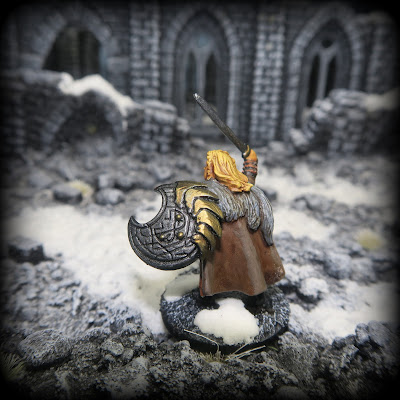 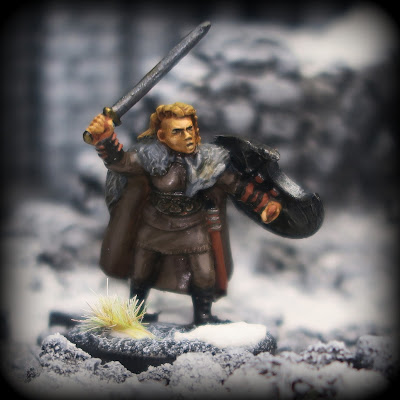 The model is 28mm and as with my previous purchased from Bad Squiddo, it was nice and clean with no flash or moulding needing to be removed before prepping.

As someone who grew up reading the works of Robert E Howard, it's probably not surprising that when someone mentions a Hero I naturally think of a windswept northern barbarian striding across the tundra of Hyboria. And this figure is very inch the heroic archetype. The sculpting of the furs, in particular, is exceptional and far better than one would typically get on a 28mm model I think. Although it has to be said he's about 32mm to the eye so he's a big fella! 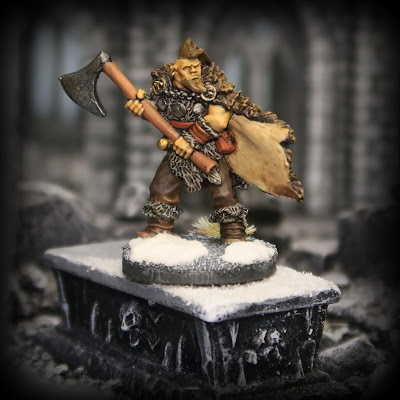 This metal figure is suitably chunky and has a real heft to it when held in the hand. Call me old school but it feels much more satisfying than an equivalent resin or plastic miniature. 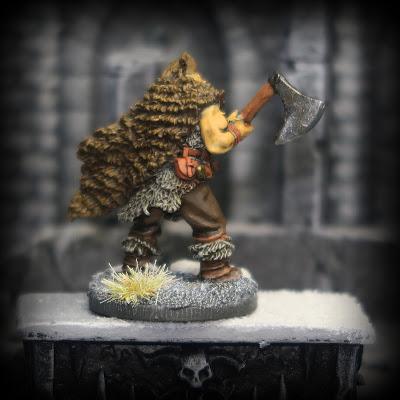 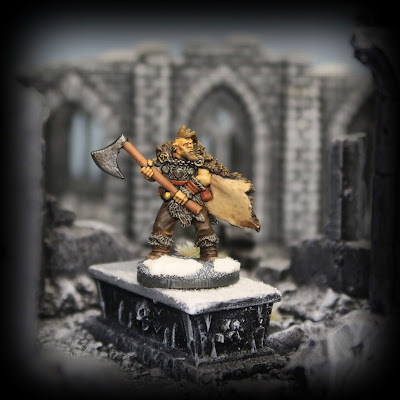 From here I am heading towards the final chamber the Lair of the Spider before braving the Snowlords Challenge. I can hear ominous scuttling from the darkness ahead...did someone way the spider wasn't there any more, because I'm not so sure...

Lair of the Spider - Spider Scorpion

The description for this penultimate chamber in the Chambers of Challenge says that the aforementioned spider has been scared off by something worse. Well, I think a Spider Scorpion can definitely be described as worse! This fearsome critter is as creepy as a spider but with an added reason to be wary. Both insects give me the creeps at the best of times, but combined this model was a challenge just painting it. 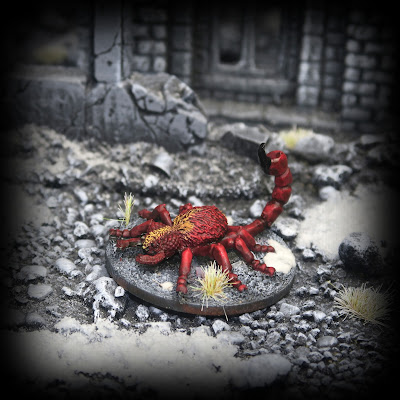 This is a Ral-Partha figure that I picked up on eBay some time ago. It has been sitting - no, Lurking - in my lead pile ever since just waiting for a chance to pounce. The tail is cast separately and I had to do a bit of work to make the joint fit properly before glueing it together with a strong Epoxy glue to give it some resilience. 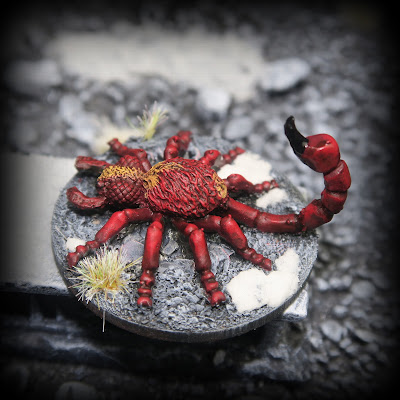 I have a confession to make though, this wasn't my first choice for this room. I have a large Beholder model that I was going to use here and I got as far as priming the figure but I couldn't face it (no pun intended). Despite looking forward to painting it for the last thirteen weeks, when it's time came Eye just couldn't find the motivation (pun definitely intended). Thankfully the Spider Scorpion was waiting in my lead pile to replace it. So there it is, I have battled my way through the Chambers of Challenge and now I stand before the Snowlords alter awaiting instructions. What devilish tribute will be demanded of me I wonder?

With my recent shenanigans with the Royal Mail, I wasn't sure I was even going to finish the Chambers of Challenge, let alone have time to work on the Snowlords final challenge. But a change of plan and a sudden burst of productivity (that surprised even me) meant I completed the chambers a couple of days ago and I was able to get started on my final Challenge. Curts instructions were as follows 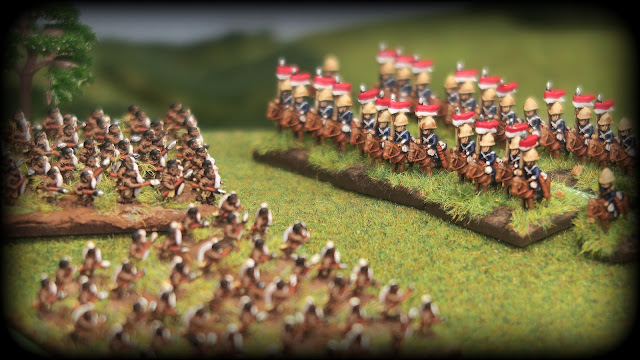 "For the SnowLord’s Altar let’s look into your collection of unpainted minis (Notice how I just assume that you, like me, have a pile of shame sitting in the wings!) and see if there is anything that you’ve been neglecting or avoiding to do. Maybe it’s because it’s intimidating, or you’ve lost steam on the project, but let’s see if we can use the Altar to create a challenge for you." 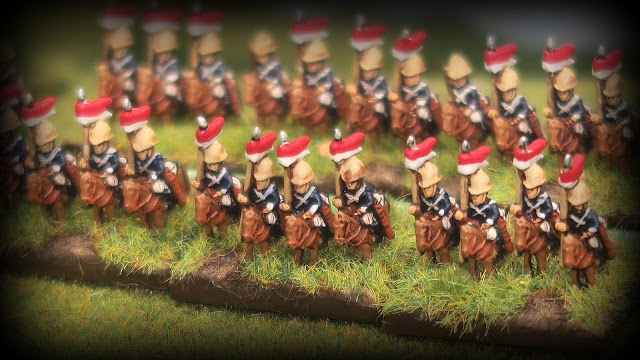 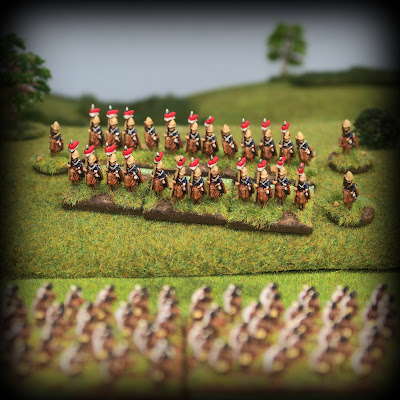 In previous challenges, I have painted a lot of 6mm stuff ranging from Alexanders invasion of India, the Pyrrhic and Punic wars and the Anglo Zulu War. This year I haven't painted any 6mm miniatures (apart from some buildings)  so I thought it was time I revisited one of my older projects. So I hereby present the 17th Lancers as they were in the latter half of the Anglo Zulu War. Their white plastron tunic front has been turned around to show the darker blue reverse side although they couldn't do the same for the white cuffs on the sleeves. Their helmets have been dyed tan like the infantry to make them less conspicuous. The trousers were dark blue with a double white stripe down the outside and while I didn't do a double line my hand was steady enough to paint in a single stripe... they are 6mm after all! At this scale, the OR's uniform looks very similar to the officers except for the white belts and pouches. On the officers, I have used gold to highlight the pouch belt which crosses the chest and is distinctive from the OR's pouch belt which would have been white. 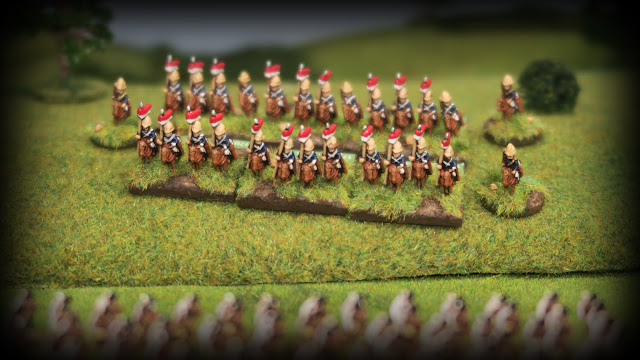 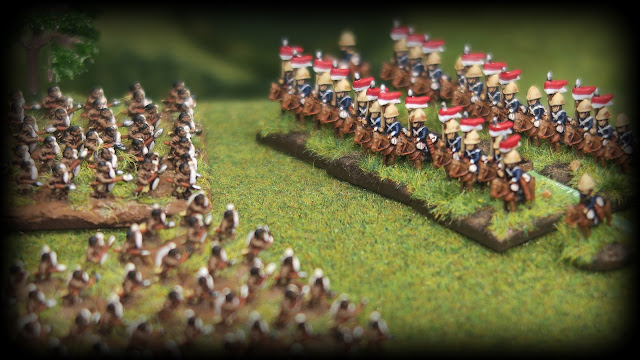 I've been avoiding them because they are tricky to paint at 6mm. The dark uniform and crisp white kit doesn't leave a lot of room for mistakes. To make these look good I would need my steadiest hand and smallest brushes. Now that they are done I'm pretty happy with how they have turned out. I have arranged these in groups of four with a dice holder on the back of the base. I've been playing a lot of solo AZW lately and I'm in the process of altering my older bases to include these dice holders. I have been using TMWWBKs but being flexible with how many figures are in a unit (the rules suggest 8). So these bases could represent three companies of lancers, or I could change the unit sizes to 16 or 24 figures that can take eight casualties before breaking. It depends on the size of the engagement I want to play. I've used TMWWBK's like this for big battles and small skirmishes alike with a lot of success.

So that's it, my passage through the Chambers of Challenge is complete, and this will also be my last entry for Challenge XI. Its been huge fun as always and well done to all the Challengers that have taken part this year, its an honour to be included in such hallowed company. Congratulations and thanks must of course also go to Curt for running this madness every year and well done also to the minions who help keep this brilliant enterprise going. 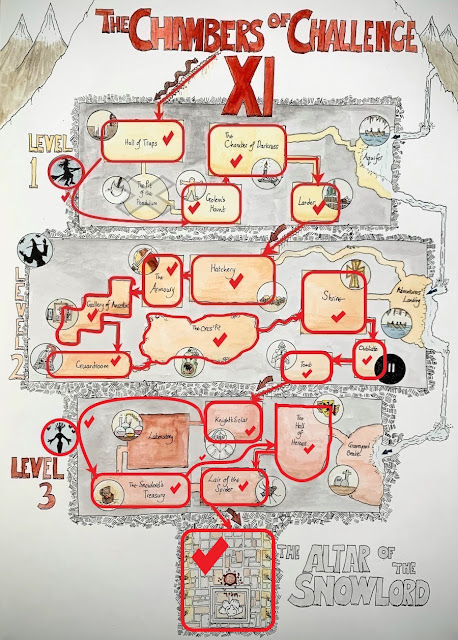 My personal points target for the whole Challenge was smashed with a few weeks to spare and in the end, I finished with over 300 points clear. Much of that total was gathered through the Chambers of Challenge (572 points in fact!). More importantly, I came out of the whole Challenge with a lot of newly painted figures to play with, focusing on painting practical miniatures rather than display pieces. 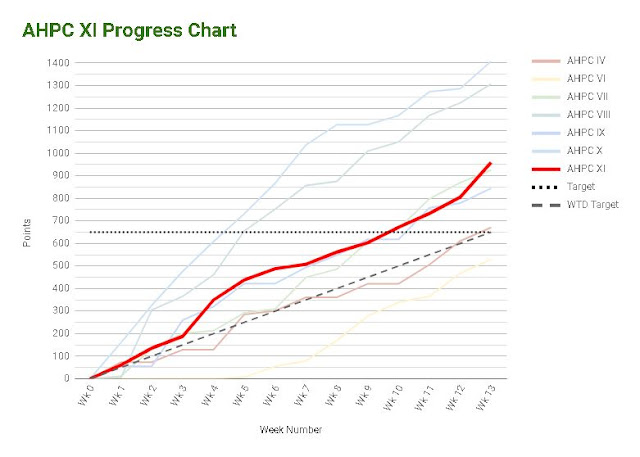 Its been a great event once again and the camaraderie and friendly competition has been a much welcome salve during a very difficult winter. Congratulations must of course go to Curt for once again running such an amazing event. And of course, we shouldn't forget the contribution of Lady Sarah for supporting Curt in this huge endeavour. Her silent contribution should never be underestimated! 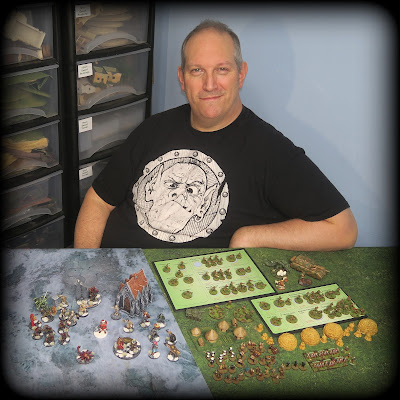 Many challengers have also thanked the Minions for their help keeping this ship afloat, and as someone who was a minion several Challenges ago, I can fully appreciate just how much effort all the Minions will have put into this event. Well done to you all. Lastly, I'd like to thank all the other Challengers for taking part and being such great sports. We have seen some truly amazing displays of painting talent and productivity over the last 13 weeks and it has been an honour and a privilege to count myself amongst such hallowed company.

Now that the Challenge is over the big tidy up commences. My room looks like a gang of ill-tempered goblins has rampaged through it and there's probably a year's worth of static grass embedded in the carpet.