More Thugs and a re-based Knight

The Lockdown continues and the Easter weekend has been a rather strange affair for many of us. My family and I would normally be out and about - indeed we were supposed to be on holiday right now - but instead, we have been indoors, relaxing like never before! Both my wife and I have thrown ourselves into our hobbies to keep occupied and this enforced relaxation has been a strangely satisfying experience.

Focusing on hobbies has helped divert our attention from the news (which frankly has been horrifying) and has turned something that ought to be a terrible negative into a slightly more positive experience for us. Don't get me wrong, we are not burying our heads in the sand, and we are keeping abreast of events, but it would be easy to end up watching the news all day long and to sink into a deep depression. We are incredibly worried about our daughter and my brother-in-law, (both nurses) and of course the wider family as well. But we have no control over that and it would be self-indulgent to allow depression to overwhelm us when we have so much to be thankful for at the moment.

So instead of getting out and about I have been painting, writing and making videos all weekend. Some of this will be published later in the week, but for now, here are some more Frostgrave figures that I have just finished. 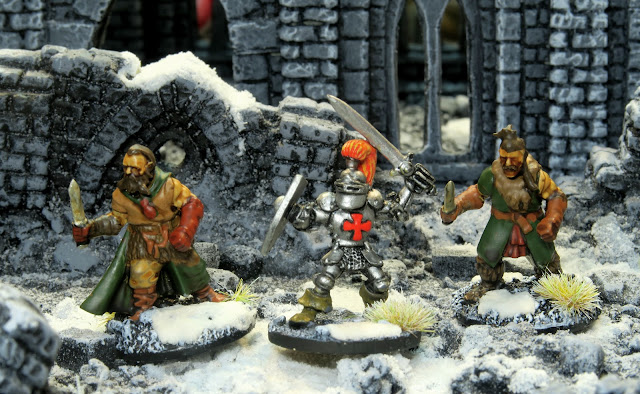 The two models on the flanks are more 'thugs' from Northstar's Barbarians pack. Simple paint jobs but more than suitable for a game. The figure in the centre is a really old model from at least a decade ago that was originally painted for DnD. I decided I wanted to rebase it so it would match up with the other stuff I'm working on.

Next on the painting table sees a return to my 6mm Zulu War project. I'll be putting out a YouTube video about this (hopefully later today) and I'll post some pictures of what I have been working on in a couple of days. In the meantime, stay safe everyone.
Posted by BigLee at 11:30