The Skirmish of Ostrad Street 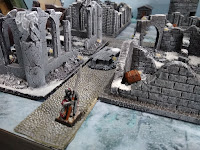 The Padawan and I got another game of Frostgrave done over the weekend. We split it into two sessions as we were both busy on other projects and we were having trouble bringing the fight to a conclusion. In the end, we opted for a drastic temporary rule change to 'speed things up' but this proved disastrous for one of us (guess who?)

The Setup
Once again we set up a simple tester game with a table full of terrain and two evenly matched warbands starting on either side of the table. The objective was just to get the rules settled in our heads and have some fun. I think we achieved both, but it was a tough slog!

We must have been doing something wrong with the rules because we had about 8 turns of melee where basically nothing happened. In the end, our desperate decision to force a conclusion backfired on me and I lost conclusively. The Padawan played well and kept me on my toes. More importantly this is her second win with the game genre she chose to play, so hopefully she's feeling inspired!

I'm already working on our next game, but it's my turn now and I need something a little historical!