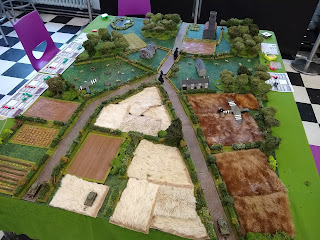 Somewhere in the tangled lanes and tiny field of the Normandy Bocage, there is a Tiger Tank on the loose. Reports have come in of allied vehicles being destroyed and bad weather has made aerial recon impossible. This one tank (let's hope it is just one tank) could hold up the entire advance in this area. It needs to be rooted out and destroyed and a British tank commander has been given the unenviable task of dealing with it. It doesn't help that there are also reports of German Panzerfaust teams lurking in the countryside... this mission is going to be rough.

Just three weeks ago the Rejects decided we would put on a demo game at the Skirmish wargames show in Sidcup, and somehow I got volunteered to put together a game. I'm still not sure how that happened, but despite the short preparation time, I think we were able to put on an entertaining game and a visual spectacle for visitors. I already had pretty much everything I needed for the layout and thankfully the What a Tanker! rules are easy to play. My main task (aside from a little painting) was to come up with a twist that made this game a unique and interesting element both for players and visitors. I wanted to bring in some infantry, namely Panzerfaust teams, to give the allied player something extra to think about. I'll publish these rules on the blog tomorrow, and I have tried as far as possible to keep them simple and in keeping with the basic ruleset.

As usual, I took a lot of photo's but let's start with a few shots of our Demo Game before I move on to more general pictures of the show.

In between running the game we also found time to look at the other demos on display. There is always an eclectic mix here with Skirmish games next to full wargames and historical battles cheek by jowl with sci-fi. Not everyone's cup-of-tea, but I like it.


There are only a handful of traders at Skirmish, with a bit of a lean towards model builders and toy soldier collectors. Having said that I always find something to buy and this time was no different. In particular, I made a special request of Debris-of-War and they made me a couple of packs of their winter tufts so hats off to them for being so customer responsive. I ended up going back to their stall and buying more stuff (yet more resin terrain). The Magazines were freebies being given away by the show organiser. Very nice, I'll enjoy looking at these. 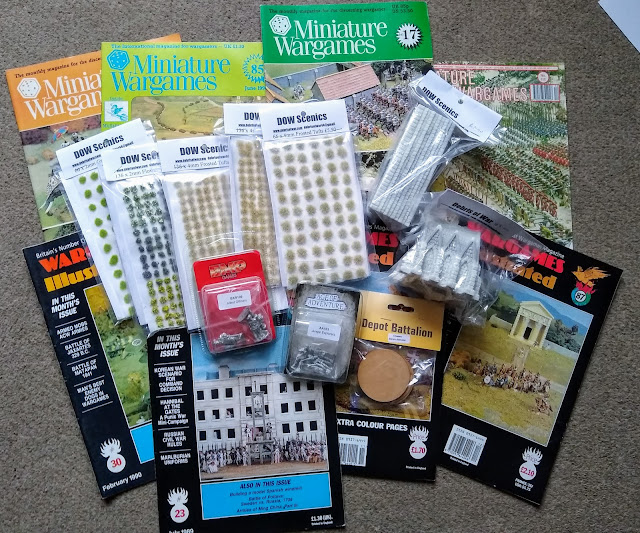 I think we will definitely run more games at Skirmish. Maybe next time we can get Ray to run a Donnybrook game? That is, of course, if it goes ahead. It looks like many of the larger wargames shows could be impacted by the growing Coronavirus crisis (not to strong a word now I think) an Skirish may be the last show were get to for some time. Let hope things have settled down by the Autumn when this show is back on in September.
Posted by BigLee at 18:09