Panzerfaust Teams in What a Tanker 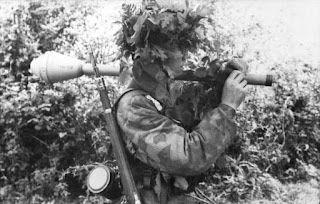 So over the weekend myself and fellow Rejects Ray and Stuart headed down to Sidcup for one of our regular game shows. It's a small affair based in a school and usually features a handful of demo games and traders. We usually make an effort to attend, especially as it's only a short run in the car to get there for us three at least. Several times we have said we should run a demo game here and a few weeks ago Ray suggested it again. I blithely said, "I'll run a game of What a Tanker" without doing the math in my head...I had less than three weeks to throw together a game! Well, the show is over, the game was a success and we had a blast. I think we may very well be doing this again.

I wanted to run a 1944 game of What a Tanker set in the Normandy Bocage country as I had a lot of terrain ready for use, and most of the vehicles I would need. However, I also had an idea for a 'special rule' to use Panzerfaust Teams in the game. The rules don't include infantry teams but I really wanted to give the Allied player several things to think about, not just "where is that blasted Tiger"! The following rules were the result. I did a bit of playtesting before the game but the real test was on the day and I think they added a new element to the game that was very interesting.

The German player can deploy two Panzerfaust Teams on the table. For each team, the player will be given three blinds/tokens, only one of which will be marked to confirm this is the team and the others are red-herrings.

When a Panzerfaust token comes within 6” of an enemy tank - and if it is in the visibility arc of the Commander or Crew as described above - then the allied player rolls 1d6 to spot the enemy team.

When a Panzerfaust team is revealed, if it is not destroyed, it must make an immediate attack against the closest enemy tank. Consult the Attack rules and treat just like any other shot on target. Note the following:


The effect of this simple bolt-on rule was to give the Allied player an interesting tactical conundrum. 'Buttoned up' they have a better chance of survival against the Tiger but have less chance of spotting a Panzerfaust team sneaking upon them. The Panzerfaust has the potential to destroy a tank like a Sherman but its more likely to cause some damage that could prove crucial later in the game. Its a balancing act that gave the allied player plenty to think about. It also made the game more interesting for the German player as he had to move his tokens to bring them within the very short range of 6".

Anyway, I commend these rules to the community, hope you find them useful.
Posted by BigLee at 09:30

Email ThisBlogThis!Share to TwitterShare to FacebookShare to Pinterest
Labels: 15mm, Normandy, Skirmish, What a Tanker!