So after a long hiatus following the last Winter Painting Challenge I have finally found some time to go back to my Zulu War project to think again about the rules I want to use. This time I have been giving some thought to adapting The Men Who Would Be Kings rules, written by Daniel Mersey and published by Osprey. This exercise has been very interesting, shows promise and has even resulted in firm plans for a full scale solo play test sometime next week.

This back to front approach - buying and painting the models before I have even settled on a rule system - is typical of me. Actually that's a little unfair as I did spend quite a lot of time thinking about rules and exploring several options prior to buying the figures, but I never really came to a satisfactory decision. In the end I just painted and based the figures in a configuration that I thought would be visually pleasing and practical, with my fingers crossed that I could make them fit a rule system further down the line. Again, typically of me, I got sidetracked with another project after the Challenge ended and its taken nine months for me to return to my search for a compatible rules system for the Anglo-Zulu War.

Before I go on to discuss my experiments with TMWWBK its worth mentioning my previous 'research' as I was able to read quite a few alternative rule-sets that are freely available on the internet. I'd definitely recommend hunting down a copy of All the Kings Men for larger figures, or Taking the Bull by the Horns which is designed specifically for 6mm. There are also some very interesting and useful rules and notes on colonial wargaming by the likes of Donald Featherstone and Jack Scrubby that can also be found online and are well worth reading. The other rule set I gave serious consideration to was the one that Postie uses as the basis of his Zulu War games, The 1879 Zulu War by Richard Tory. Its a great rule set and is packed full of excellent and detailed research. Its an old set and I don't know how readily available it is but its worth tracking down.

The closest I came to deciding on a set of rules was when I play-tested some ideas for adapting To The Strongest (I wrote about this here). I never did get around to writing up and developing my ideas, but its still simmering on the boil in the back of my head somewhere! This week however I have been looking in another direction and a rule set that I bought, read and thoroughly enjoyed last year but never got around to seriously exploring as an option. The Men Who Would Be Kings is more commonly seen being played with individually based 15 or 28mm figures however I'm not the first person to give serious thought to adapting it to 6mm wargaming.

The first consideration for me was what to do about unit sizes. My Zulu's for instance are based on large square bases of 48 figures representing about 500 warriors, way above the normal 16 figure tribal units in the rules. Meanwhile my British units are 16 figures, again larger than the 12 stipulated in the rules and representing a company of about 120 men. Personally I think my ratios between British and Zulu units look right, aesthetically and historically. However this throws up a new problem as I'm in no hurry to break the hidden maths behind the rules by changing the number of 'hits' a unit can take. So my 'solution' to this quandary is simply this, despite using a 16 figure unit to represent Regular Infantry I'll still work on the principle that they can take 12 casualties before being removed. 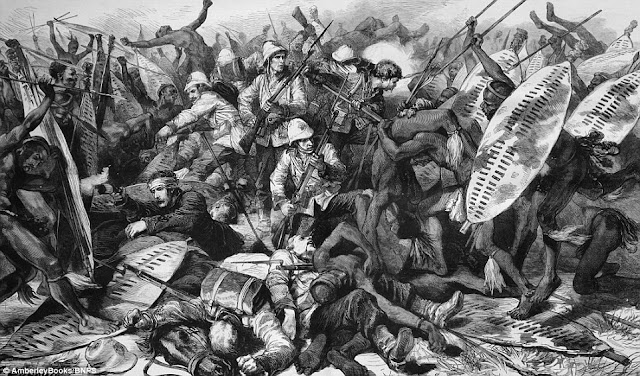 This throws up another problem - this time with regard to firing - as normally you throw one dice per figure and now my unit sizes are out of sync with the rules. My 'brainwave' (if you can call it that) is to use dice markers showing how many men are remaining rather than using then to record casualties. So my Regular Infantry unit for instance will start off with 12 pips representing 12 figures and as casualties are taken the number is reduced. When the pips get to zero the unit is removed from play. Likewise my large Zulu units of 48 figures will still take 16 hits to remove from play, starting the game with dice counters showing 16 pips and counting down as they take casualties.

The final decision to be made was much simpler; what to do about ranges and movement rates. I want to play these games on my small table at home so its a fairly straightforward move to change inches to cm. So a Tribal Infantry unit normally moves 8" and will now move 8cm, and a Field Gun would normally have a range of 36" its now 36cm. This means I can get set up quite a large battlefield with plenty of figures in a relatively small space.

One additional consideration that I have just thought about (and will look at when I do the play test next week) relates to firing ranges. The rules say that the range is measured as the closest distance between two units (and fire arcs are 360° from all but close order units and artillery), which is fine when counting range in inches. However if I deploy one of my regular units in line the line will stretch 8cm long. In addition the way the rules define the fire arc of a unit means that the furthest unit could be as much as 6cm from the enemy. This diagram illustrates the problem:


My 'solution' - which is need to test in a game - is to treat this unit as if it were divided in two and check the ranges for each half using the normal rules. This could potentially see part of the unit at effective rage and the other half at long range but I think its a compromise that suits this scale. Having said that I need to play test this idea to see if it really makes a huge difference to the game. I don;t want to over-complicate things and deviate from the rules as they are now unless absolutely necessary.

Having now made a few decisions about adapting the rules it was time for me to put my changes to the test. Next week I'll try to do a simple play test game* to see if the changes I propose are actually practical. Hopefully by the end of next week I will post details of the scenario I decided to play, how the game worked and what changes I need to consider going forward.  (*I'm also going to try out the Mr Babbage solo play system suggested in the rulebook. If all goes well I'll be playing quite a few solo AZW games over the next few weeks)
Posted by BigLee at 11:07