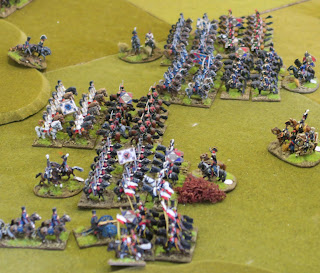 Sunday morning and I travelled over to Posties shed-o-war expecting to meet up with several members of the Rejects for our usual large scale battle. However when I arrived I was told only two of us were able to play so we had a rare one on one battle. My opponent was Surjit and Postie had set up a Napoleonic battle set in 1813 during the War of the Sixth Coalition. As usual we picked our sides randomly and I got the French while Surjit had a mixed force of Prussians and Russians.

Postie decided to play out part of the Battle of Lützen in which Napoleon attempted to halt the advances of the Sixth Coalition. The French invasion of Russia had resulted in a disastrous campaign and the loss of much of his veteran army. Following this the enemies of imperial France felt emboldened and quickly raised a new Coalition against Napoleon. In response the Emperor assembled an army of just over 200,000 men, the majority of which were untrained and inexperienced. There was also a chronic shortage of horses and therefore of cavalry. Napoleon was non-the-less confident he could neutralise the threat to his authority by acting quickly.


Action
First off lets start with a picture to show the setup. I've tried to label the various Brigades but if the text is too small to read on your screen just click the picture to enlarge.

When thinking about my plan the phrase “unmitigated disaster” comes to mind. Posties set up the table historically but frankly it was a terrible position for the French who had the biggest tactical challenge from the very beginning. All my infantry was clustered in the centre across from the much smaller Prussian infantry but both my flanks were horribly exposed to the numerically superior Prussian and Russian cavalry. I could see the danger and recognised that the enemy were in a perfect position to encircle my troops, but I still put my head in the lion’s mouth!

Maybe it’s worth explaining why I felt it necessary to spring my enemies trap for them. On my right I had three enemy cavalry units and nothing to stop them. I had no cavalry here and all I could hope to do was block their inevitable attack with an artillery battery and a couple of infantry squares. I hoped this would keep them at bay long enough for my still superior infantry force to smash into the Prussian infantry. On the left flank of my infantry however there was a large open plain which begged the Russian cavalry to turn into my flank...and I failed utterly to do anything about this. Meanwhile my Cavalry Division (way off on the far left of the battlefield) were facing off against a superior force of French and Russians. My only hope here was that my Guard Cavalry could neutralise Prussian cavalry units quickly enough to draw in their reserves, keeping those reserves from attacking my infantry in the centre. Here my plan sort of worked, most of the reserves did indeed stay to fight my cavalry division but they still had enough spare regiments they could divert two Cuirassier regiments towards the centre and attack my infantry's exposed left flank.

By the end of turn one I should have recognised the danger I was in and spent a time organising my forces for a more defensive position but I was convinced I couldn’t hope to win the game simply by sitting idle and waiting for Surjit to throw his forces at me. I still think a defensive battle would have been a mistake because the Prussian/Russian cavalry on both flanks of my infantry could have spent a couple of extra turns to come wide around my rear. I felt my only hope was to use my superiority in infantry quickly to snatch victory from a bad position. I chose poorly!

The final points totals were 24 to the French and a decisive 38 points to the Prussians. A crushing defeat of the French if ever there was one. Back in 1813 the French won this battle, which just goes to show that I'm no Napoleon!
Posted by BigLee at 17:00