Barbed Wire in the desert

I've been slowly building up my collection of 15mm scale desert terrain for some more What a Tanker! games. I'm not above buying some pre-painted stuff and I have a small but growing collection of the Flames of War desert buildings which have saved me a lot of time and effort. While rummaging through some boxes in what passes for my store cupboard I found another box of Flames of War terrain back from when I was collecting stuff for my Normandy project. A set of barbed wire fences, that hadn't seen the light of day since I bought them! Now I decided to re purpose them for my desert games and that meant a bit of a repaint. 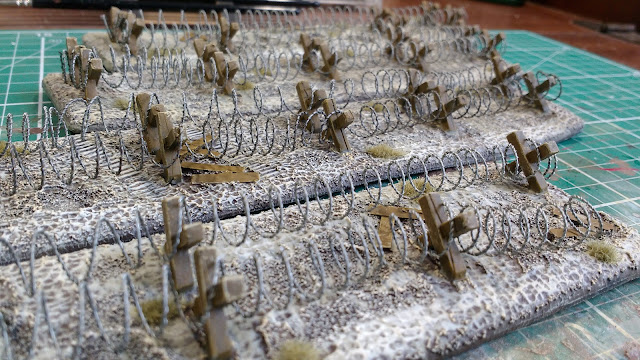 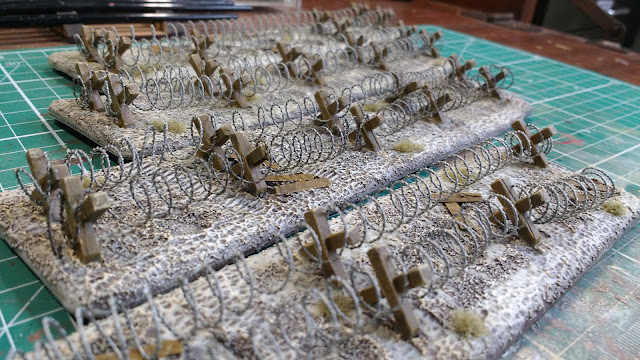 I removed the wire and repainted the bases using the same colour scheme that I have used on much of my other terrain. I also repainted the cross posts as I didn't like the dark brown colour they came in originally. All the bases were then decorated with a few 'late fall' grass tufts so they match my other desert terrain. Once the wire was returned and fixed in place I gave the four sections a liberal coating of matt varnish and I'm really happy with the outcome. The only additional change I may make is to apply some paint on 'rust' as all the barbed wire I have seen in photo's of the desert doesn't look as shiny as this lot. Each of these sections is 8" long so I only have a total of 32"of wire fence which may not be enough for my needs...I may buy another set and repaint them to match these but I'll wait and see if I need them first.

The use of barbed wire in the desert was of limited value as it could easily be circumvented by armoured vehicles. The original frontier wire between Italian controlled Libya and Egypt looked formidable (it was 20-30 foot wide in places  and stretched 271km) but it was primarily built to limit the movement of the Senussi Arabs. When fascist Italy declared war on Britain in 1940 advance patrols from Wavell's command began to dominate the area and regularly crossed the wire, using hooks dragged by tanks to break through the fence.

By the end of the desert war it was the minefield that proved the more effective barrier and even today there are an estimated 17 million active landmines in Northwest Egypt. In a bizarre and worrying twist terrorist groups like IS are taking to the desert to plunder this vast resource of unexploded munitions. A bomb is still a bomb it seems, even if its made from 70 year old explosive! (Source: Newsweek).
Posted by BigLee at 17:09