Tanks begin to roll in

After my recent play test of the new What a Tanker! rules I decided I wanted to play more of this game and that I want run a game at Reject HQ as soon as possible. I have a random selection of 15mm tanks left over from when I sold most of my collection a few years ago. I have enough 1944/Normandy tanks and terrain to play games in this period but in the end I decided the call of the Western Desert was too strong. Despite amassing a large 6mm collection for this theatre the chance to repaint some early desert war tanks in 15mm was just too much of a temptation. Nearly a hundred quid and 16 tanks later I have ordered a range of British and Italian armour to play What a Tanker! in the setting of Operation Compass, late 1940 early 1941. 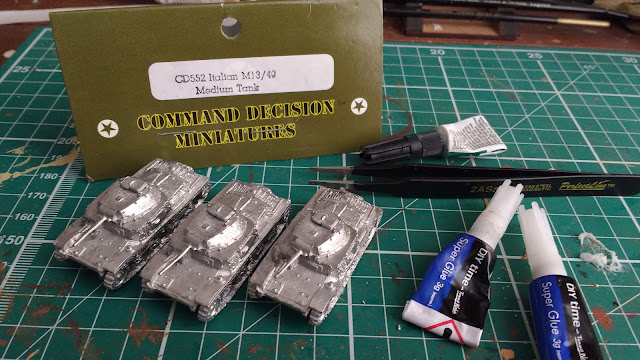 The first batch of models arrived yesterday, with some M13/40's from Old Glory. I haven't bought from this company before and was pleasantly surprised at the quality of the castings and the speed of delivery. Apart from some minor warping of the tank deck (which won't show once painted) the casting is perfect and quite detailed. I'm  looking forward to slapping some paint on these.
I've also bought some Battlefront M11/39's and L6/40's to get me started with the Italians. For the British I have managed to get A9 & A10 Cruisers from PSC, some Valentine II's (also from Old Glory) and a Matilda II from Zvezda. An eclectic mix that will arrive over the next few days. I'm like a kid in a candy store and my enthusiasm is evidenced in the rolling of my wife's eyes whenever the post arrives!
Posted by BigLee at 09:15