A trio of Valentine II's

Following hot on the heals of the Italian M13/40's I completed earlier in the week here is a squadron of British Valentine II's. I would have had them completed a few days ago but I have been waiting for some unit insignia and divisional decals to arrive in the post. These tanks can face off on equal terms with the M13's which means I'm all set to play What a Tanker in the setting of the Western Desert. I have plenty more (earlier) tanks on the production line including some M11's and A9's and A10's. 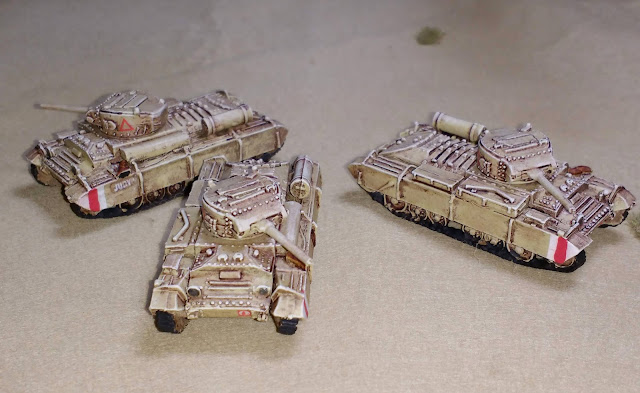 The Valentine arrived in North Africa a bit late to take part in Operation Compass but it comes at the end of the 'early' period of the desert war that I want to play. The A9's and A10's are the starting tanks (Level 1 in the rules) covering 1940 to early 1941 with the next level including the Valentine. Basically I want enough variety of early desert tanks to allow a starting point for some linked games with progression for players to become tank aces. 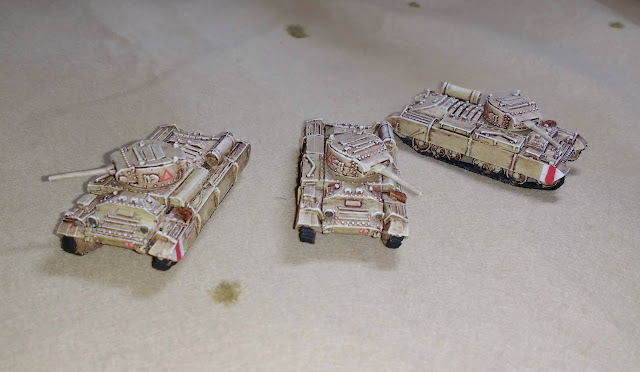 Initially known by the catchy name "Tank, Infantry, Mark III*" (got love British tank nomenclature!), thankfully from about June 1941 it became known as the Valentine II. This tank had an AEC A190 131 hp 6-cylinder diesel engine with an external jettisonable fuel tank to increase range in the desert. The two man turret was a compromise to reach the specification for armour thickness of 65mm (a three man version had been designed with thinner armour but the concept was rejected) but the main problem was the choice of the Ordinance Quick Fire (OQF) 2pdr gun which lacked a High Explosive round capability.

Despite these compromises - which meant the tank wasn't as fast as a cruiser tank and was more lightly armoured than an infantry tank - the Valentine II was a reliable vehicle and popular with the men that crewed it. The tank also had one other benefit; it had more potential for upgrade than the earlier A9's and A10's. This meant that later versions could be redesigned to carry the 6-pounder anti-tank gun and finally a 75mm gun which could fire both AT and HE rounds.
Posted by BigLee at 20:26

Email ThisBlogThis!Share to TwitterShare to FacebookShare to Pinterest
Labels: 15mm, Old Glory, Tanks, What a Tanker!